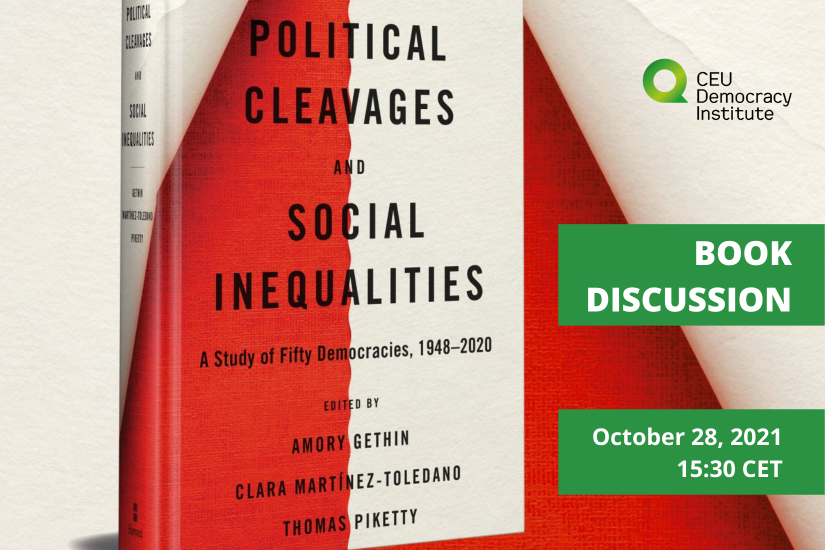 Building on Thomas Piketty's seminal work on the structures and dynamics of inequalities, Professor Piketty gathered a team of more than 20 researchers to analyze the effects of inequality on political polarization across 50 democracies from 1948 to the present. The result of their collective work is "Political Cleavages and Social Inequalities" published recently with Harvard University Press.

The edited volume builds on a unique set of surveys conducted between 1948 and 2020 in fifty countries on five continents, analyzing the links between voters’ political preferences and socioeconomic characteristics, such as income, education, wealth, occupation, religion, ethnicity, age, and gender. This analysis sheds new light on why growing inequality in many parts of the world has not led to renewed class-based conflicts and how political movements succeed in coalescing multiple interests and identities in contemporary democracies. It also helps us understand the conditions under which conflicts over inequality become politically salient, as well as the similarities and constraints of voters supporting ethnonationalist politicians like Narendra Modi, Jair Bolsonaro, Marine Le Pen, and Donald Trump.

CEU Democracy Institute is thrilled to receive Clara Martinez-Toledano, a co-editor of the book, who will introduce the methodology of this path-breaking volume, and its most important findings; as well as Tom Zawisza and Filip Novokmet, the co-authors of the chapter on Central and Eastern Europe who will present their chapter, followed by comments by Istvan Gyorgy Toth and Gabor Toka.

Please note that registration is required if you would like to attend the event in person. Please register here.

Please note that proof of vaccination is required to enter CEU premises, and wearing a mask is obligatory in all common areas and strongly recommended in rooms. Read more about CEU’s Covid-protocol here.

If you are unable to attend in person, the discussion will also be streamed online, on the DI’s Facebook page.

Clara Martínez-Toledano is Assistant Professor in Financial Economics at Imperial College London and Wealth Distribution Coordinator at the World Inequality Lab. She holds a PhD in Economics from Paris School of Economics and prior to joining Imperial College she was a Postdoctoral Research Scholar at Columbia Business School and an External Consultant for the OECD. Her research interests are on topics on household and public finance and how they interplay with economic inequalities.

Tom Zawisza is a British Academy Postdoctoral Fellow at University College London. He completed his PhD at the Faculty of Economics, University of Cambridge, and was recently a Max Weber Fellow at the European University Institute in Florence, Italy. His research focuses on analyzing the insurance and incentive effects of tax and welfare policy.

Filip Novokmet is a postdoctoral researcher at the Institute for Macroeconomics and Econometrics, University of Bonn, and a research fellow at the World Inequality Lab, Paris School of Economics. His research interests focus on the economics of inequalities, political economy and economic history.

István György Tóth is the Director of TARKI Social Research Institute. He has a PhD in Sociology, and lead various research projects in Hungary and also in international environments. His research focuses on social structures, distribution of income, economy of the welfare state, values and attitudes. Recently published in Handbook of research on economic and social well-being by Edward Elgar, Handbook of Income Distribution by Elsevier-North Holland and in large compendiums on inequality by Oxford University Press and Stanford University Press, on middle classes by Edward Elgar. He authors and co-edits the biannual Hungarian Social Reports series.

Gabor Toka is a Senior Research Fellow in the Vera and Donald Blinken Open Society Archives at the Central European University, Budapest, Hungary. He specializes in the comparative study of elections, and above all the interaction between voting behavior and the performance of democratic institutions. He is also interested in public opinion, survey methodology, and East European politics after communism.

Vera Messing is a Research Fellow at the CEU Democracy Institute as well as Head of Research Department for Methodology and History of Research at the Centre for Social Sciences at Institute for Sociology. She has over 15 years’ of experience in empirical research on ethnicity, minorities, migration, social exclusion, media representation of vulnerable groups and ethnic conflicts.