Calvary Is Everywhere: Capital Punishment and the Civic Imagination 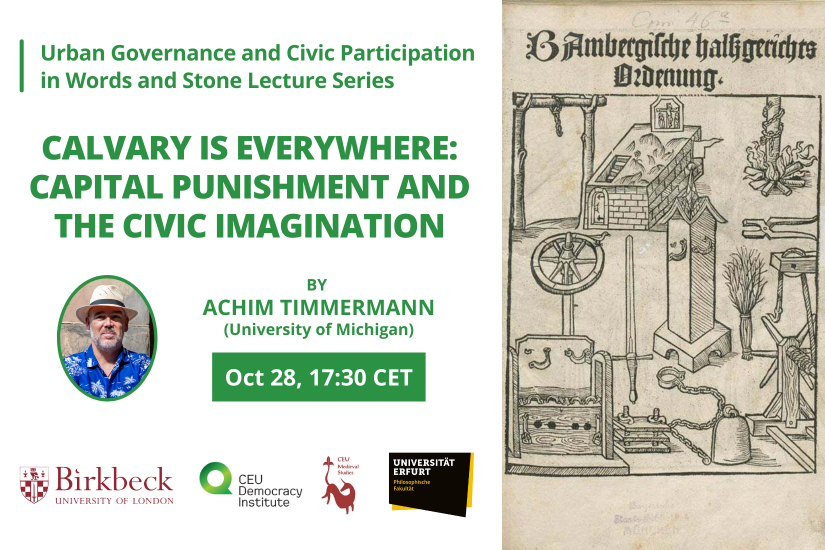 In his presentation, Achim Timmermann will explore the use of pictorial devices in the stage-management of late medieval rituals of capital punishment. In particular he will focus on the roles such images might have played in bringing about a temporary oscillation between two distinct sacrificial topographies – those namely of the fifteenth- or sixteenth-century town, with its scaffold extra muros, and of the biblical Jerusalem, with Mount Calvary looming above it.

Focusing on a series of towns in the Middle Rhine, Franconia and Austria, he will ask whether the deployment of certain pictures encouraged both the convicted offender and the audiences about to witness his or her gory death to experience the punishment ritual as a real-life Passion play. The images designed for these performances were sometimes mobile, portable, and miniaturized, but more often than not they were stationary and monumental and physically integrated into the urban matrix and surrounding landscape. As permanent fixtures, for example in the form of tabernacles (so-called poor sinner’s crosses) marking the execution site or the route leading toward it, they had much in common with the almost contemporary Stations of the Cross, which were likewise calibrated to transport their audiences into the narrative and geography of the biblical Passion, albeit in a more systematic, quasi-archaeological manner.

His investigation will thus also probe the relationship between poor sinner’s crosses and late medieval iterations of the via crucis, particularly in those cities where both types of “image trajectories” were present. It will be seen that this particular configuration often generated two rather different “Calvary sites”, sometimes on the opposite ends of the urban perimeter, but that in several cases the civic execution site and the mons calvariae of the Stations of the Cross were in fact (rather uncannily) one and the same.

Achim Timmermann is Professor of History of Art and Professor of Architecture at the University of Michigan, Ann Arbor. He is a specialist in the medieval and Renaissance art and architecture of central Europe, the Alpine regions, and Provence. His interests include the visual culture of the eucharist, the nexus between art and pilgrimage, the representation of Christian-Jewish relationships, late medieval allegory, and the architectural and pictorial stage-management of civic rituals (including the punishment of criminals). He is author of Real Presence: Sacrament Houses and the Body of Christ, c. 1270-1600 (2009) and Memory and Redemption: Public Monuments and the Making of Late Medieval Landscape (2017), as well as over fifty articles. He is currently working on two new book projects, Augmented Reality: Jerusalem and the Civic Imagination in the Late Middle Ages, and Ships, Sails, and the Sea in the Medieval and Early Modern Visual Imaginary.