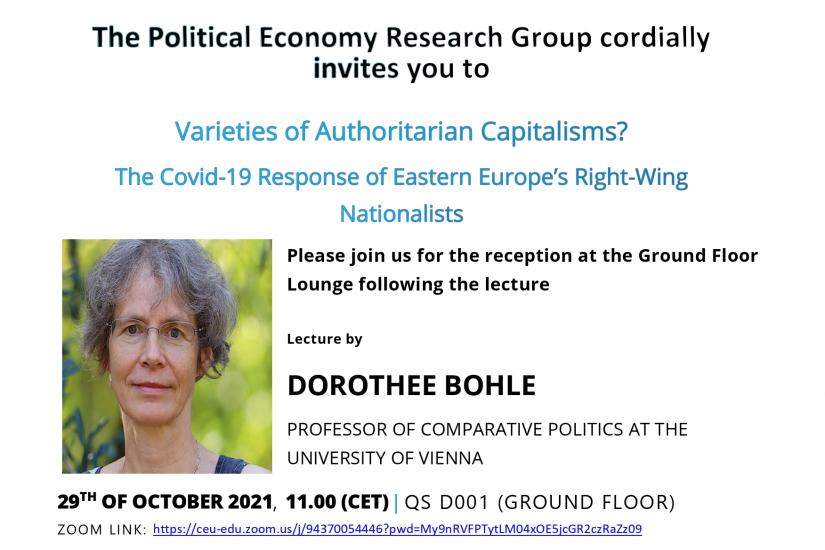 Join the Political Economy Research Group in their upcoming lecture by professor Dorothee Bohle (University of Vienna). There will be a reception after the lecture.

For those joining online, Zoom link is here.

ABSTRACT / Political economists studying East Central Europe have started a debate in how far democratic backsliding in the region has also ushered in a new, more authoritarian form of capitalism. With COVID-19, this question has taken on new urgency, as the extraordinary context of the crisis gave governments around the world a freer hand to reshape their socio-economic order. Our paper examines responses to COVID-19 of four authoritarian-leaning governments in the region - Hungary, Poland, Serbia, and Slovenia – to assess the degree to which growing centralisation of political power has also led to more authoritarian forms of capitalism. Incorporating multiple case studies allows us to assess both the pervasiveness of different mechanisms of authoritarian capitalism, as well as the limits to their use in different national contexts.

BIO / Dorothee Bohle is a professor of Comparative Politics at the University of Vienna since October 2021. Prior to that, she was a professor of Social and Political Change at EUI, as well as the Dean of post-graduate studies and the Director of the post-doctoral Max Weber Programme. From 2013 to 2016, she held a professorship at CEU, Political Science Department. Prof. Bohle also held visiting positions at the Center for European Studies, Harvard University, the European University Institute. She obtained her PhD from Free University of Berlin. Her research focuses on the political economy of Eastern Europe, varieties of capitalism, economic growth models, welfare states and financial crisis. Her book, Capitalist Diversity on Europe's Periphery (2012), which she co-authored with Bela Greskovits, is the winner of the 2013 Stein Rokkan Prize for Comparative Social Science Research. She is also the author of the chapter called ‘Financial Crisis, National Policy Responses and the Rise of Conservative Nationalism’, in the recent edited volume, The Legacy of the Global Financial Crisis. Prof. Bohle has published numerous book chapters and articles in Studies in Comparative International Development, West European Politics, Journal of Democracy, European Journal of Sociology, and Review of International Political Economy.