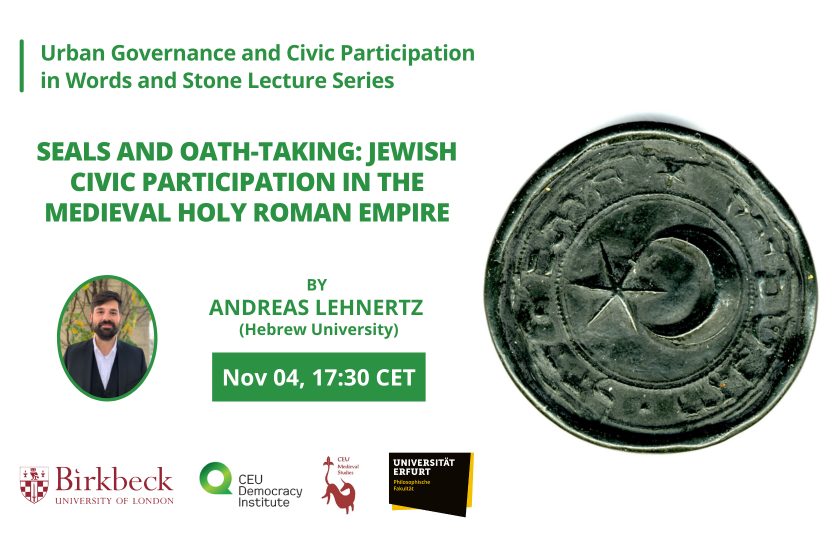 The extent to which Jewish men and women were active in “civic participation” is a challenging but nonetheless instructive field. While attempting to situate Jewish civic participation in the Holy Roman Empire amidst a broader context, the speaker aims to provide a more detailed look into its functions by examining two examples––Jewish sealing practices and Jewish oath-taking.

The character of medieval Jewish settlement in the Holy Roman Empire was mainly within urban settings. Both Jewish individuals and whole Jewish communities took part in the broader urban sealing practices by adhering to the customs of their Christian neighbors in different areas of business. Although seals had no legal meaning in Jewish law, the historical evidence of Jews sealing in settings of urban governance is one indicator of their civic participation. And while the oaths of Jews for Christians were different from those of Christians, the urban societies generally accepted and trusted Jewish oaths.

This lecture will explore Jewish sealing practices and Jewish oath-taking and what these practices say about Jewish civic participation in urban governance in the Later Middle Ages.

Andreas Lehnertz is a postdoctoral research fellow who focuses on social, cultural, economic, and religious history in Europe between the 10th to the 16th centuries. He is interested in daily life Christian-Jewish relations, marginal Hebrew and Yiddish charter notes, Jewish as well as general sealing practices, and Jewish craftspeople. In 2018, he completed his PhD at the Trier University with a study on Jewish Seals in the Medieval German Empire. Authentication and Self-Representation of Jewish Women and Men. Lehnertz is currently studying Jewish craftspeople in Medieval Europe.