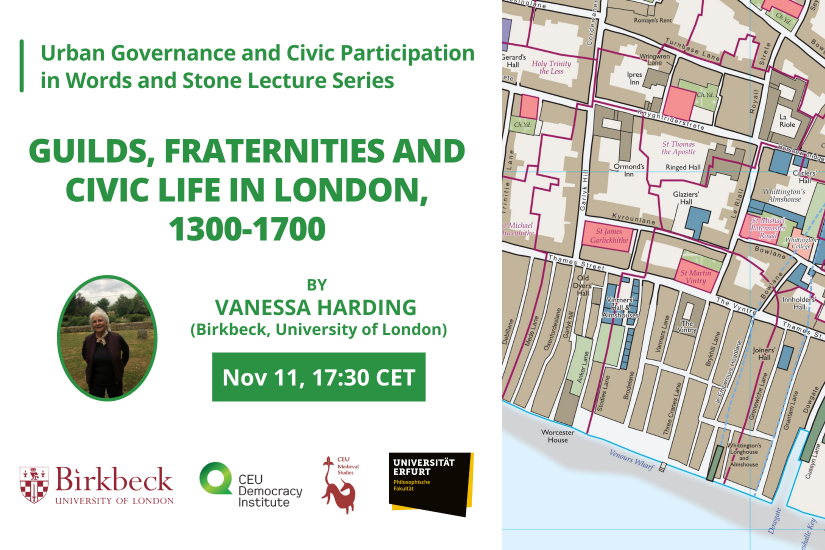 Guilds and fraternities played a large part in structuring civic life in London between the fourteenth and seventeenth centuries, as they did in many European towns and cities. Beginning as informal associations of traders and craftsmen with similar economic interests, London’s guilds evolved into formal organisations with legal status and an accepted role in the regulation of their members’ behaviour and economic activity. From the early fourteenth century, guild membership and sponsorship were essential to obtaining citizen status, with all the rights and privileges that entailed, and they continued to shape the citizen’s life, career achievement, and even his hopes of salvation, into the sixteenth and seventeenth centuries. The guilds contributed to the visual culture of the city by building guildhalls, wearing liveries, and participating in civic ceremonial.

This lecture will sketch the development of London’s guilds or livery companies over the period c. 1400 to 1700, and will focus on their contribution to the construction of civic identity and a sense of civic history through their creation and safe-keeping of a wealth of written records.

Vanessa Harding is Professor of London History at Birkbeck, University of London. Her research and writing focus on London’s social and economic history, c. 1300-1700, with a particular interest in the documentary and archival history of the city and its institutions, and in the built environment and how it was inhabited. She is currently working on a book-length study of seventeenth-century London, and developing a project to map London on the eve of the Great Fire.

Image on cover: An extract from the Map of Tudor London, ed. C. Barron and V. Harding, Revised Feb 2020, the Historic Towns Trust