Armed Citizens in Town. Control of Weapons and Armories 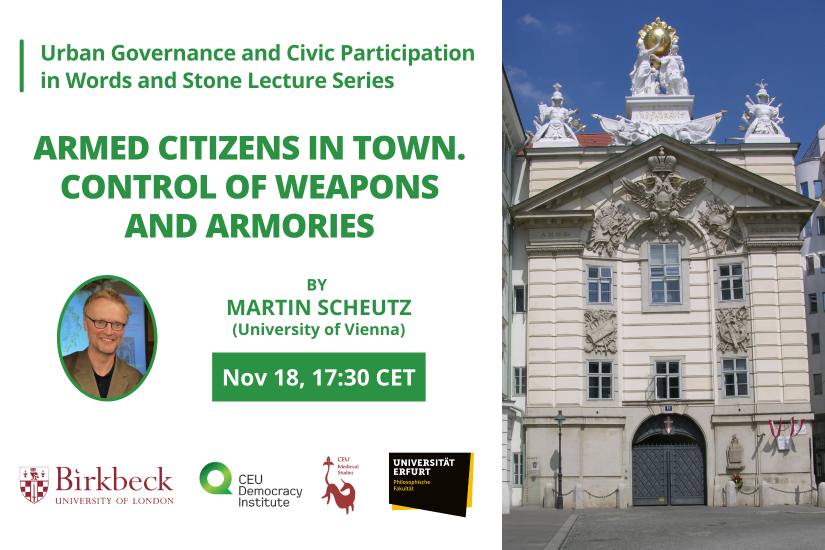 For many centuries, European citizenship was firmly linked to the possession of weapons and armor – citizens had to be able to defend their city, and weapons had to be presented when taking the oath of citizenship. Citizens had to contribute to the protection of their city. The possession of weapons established civic rights such as participation in city elections or the use of social services of the city. The urban space was therefore a place of arms, but some inhabitants of the cities, such as the clergy, strangers and women, were excluded from the civic possession of arms. The development of weapons also forced citizens to technically develop their arsenal of weapons, rifles replaced crossbows in the 16th century, for example. However, weapons in the city also led to major problems of public order. Against the background of the development of weapons, the functionality of weapons, but also the peace of the city, the city councils therefore tried to centralize the weapons in municipal armories. These armories increasingly developed into the prototype of municipal museums from the 18th century onwards.

Martin Scheutz studied history and German in Vienna, trained at the Institute of Austrian Historical Research and has been Professor of Modern History since 2001. He is also Secretary General of the "Commission Internationale pour l'Histoire des Villes" since 2010. His research fields include Urban History, Rituals in the City, Hospital History, Viennese Court, Confession and City. His publications include: Das Spital in der Frühen Neuzeit. Eine Spitallandschaft in Zentraleuropa/Hospitals in Early Modern Period. A Hospital Landscape in Central Europe (with Alfred Stefan Weiß, Vienna 2020); Ein bürgerliches Pulverfass. Waffenbesitz und Waffenkontrolle in der alteuropäischen Stadt/A civic powder keg. Gun ownership and gun control in the old European city (together with Werner Freitag, Munster 2021).