"STREETLIGHT EFFECT" IN COMMENTARY ON CITIZENSHIP BY INVESTMENT 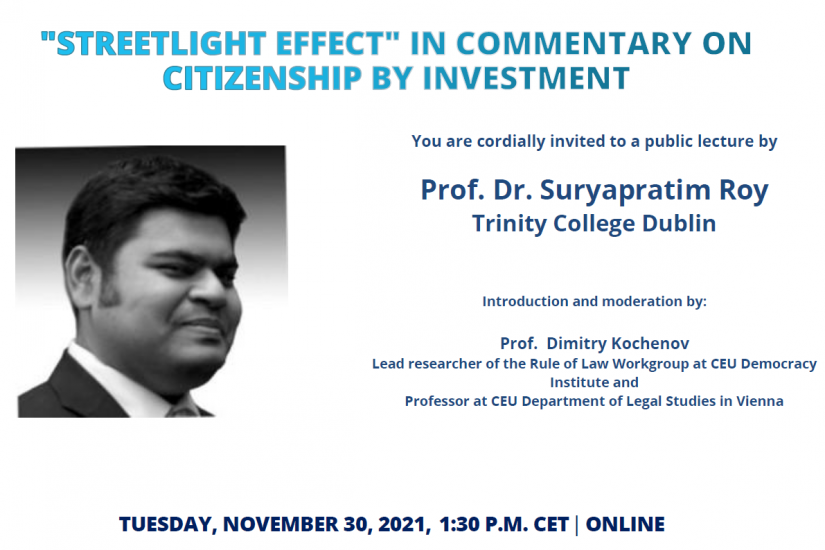 abstract | In his talk, Dr. Roy will examine recent scholarship on the sale of citizenship, providing a critical overview of the scholarly scrutiny of this growing phenomenon. Specifically, the focus will be on Ana Tanasoca’s historical sensitivity to the sale of citizenship, Luca Mavelli’s Foucauldian account of commodification, and Desiree Lim’s account of expressive discrimination. As with any nuanced political inquiry, there are conceptual, ethical, and empirical choices that inform such commentary. In making epistemic choices, an empirical claim may well be premised on an implicit ethical argument, a normative argument may be made by selectively picking a certain sort of empirical inquiry, or one among several conceptualisations of a concept may be passed off as the only one. There is therefore the possibility of a ‘streetlight effect’ where the confines of an inquiry are conducted within an already illuminated patch. Dr. Roy's intention is to show that this phenomenon applies to the scholarly commentary on the sale of citizenship. The scholarship is illuminated by a priority for the claims of community on ‘Who Belongs’ over the claims of access on ‘Who Should Get In’. There is a discursive confounding of ethical, conceptual, and empirical claims operating under the streetlight of a presupposition that the claims of a pre-existing national community should determine the claims of access.

biography | Dr. Suryapratim Roy is Assistant Professor in Regulatory Law, School of Law, Trinity College Dublin. He is the convenor of the Constitutional Governance and Social Change Research Group, and works primarily on environmental law, and legal theory. Prior to this, he has taught Development Studies at the University of Groningen. Before joining academia, he was a researcher with the South African Institute of International Affairs in Johannesburg, and practiced infrastructure law in the Mumbai offices of Amarchand & Mangaldas & Suresh A. Shroff & Co. Dr. Roy has published widely in his areas of academic interest.