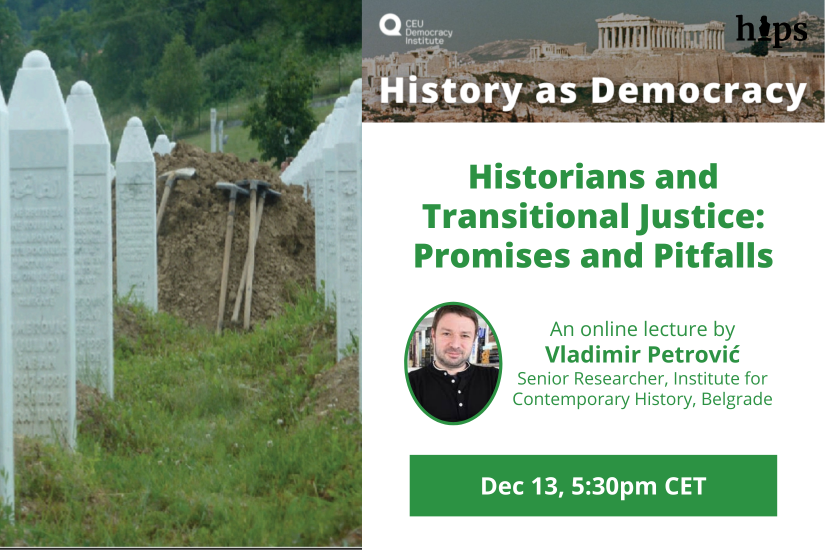 The Democracy in History Workgroup of the CEU Democracy Institute and the History in the Public Sphere Program cordially invite you to the following event:

Working through the legacy of the authoritarian regimes became a global promise with the end of the Cold War. From South American military juntas to Eastern European communist nomenclaturas and war criminals of the Yugoslav wars and Rwanda, a number of measures were introduced to such an end, ranging from international and national trials and truth commissions, lustrations for perpetrators and reparations for their victims. Under the umbrella term transitional justice, such a toolkit was promising not only to punish past violations, but also to consolidate democratic order through stabilizing its institutions, fostering rule of law, promoting human rights, putting an end to impunity, and preventing future abuse of power. As we know only too well now, this path proved to be anything but straightforward. Powerful tensions arose between the concepts of justice, truth, peace, and reconciliation. They came to full prominence with global erosion of liberal democratic values and resurfacing of power politics. Against this global backlash, together we will examine its local dynamics, discussing specifically the roles historians did and did not, could have and still can play in this process of massive reexamination of the past.

Vladimir Petrović researches mass political violence and strategies of confrontation with its legacy. He graduated from Comparative history of Central and Southeastern Europe at the Central European University. His book The Emergence of Historical Forensic Expertise: Clio takes the Stand (Routledge, 2017) examines the role of historians and social scientists as expert witnesses in some of the most dramatic legal encounters of the 20th century. Petrovic was himself working in this intersection between history and law, both in the International Criminal Tribunal for the former Yugoslavia and in the Serbian War Crimes Prosecutor’s Office. He published extensively on ethnic cleansing in the Balkans and attempts to undo its legacy, as well as on the history of nonalignment during the Cold War. He is a Senior Researcher at the Institute for Contemporary History in Belgrade.

his lecture is organized as a part of History as Democracy? project.

‘History as Democracy?’ is a series of events under the auspices of the Democracy in History Workgroup of the CEU Democracy Institute. Other projects of the Workgroup focus on what the historical study of ideas and processes of democratization, de-democratization, and so forth, may add to our understanding of democracy. In this one we ask where democracy ‘is’ in history as a discipline and a cognitive field, what the practice of history itself contributes to democracy and open society – to what extent and in what sense is or is not history ‘democratic’. It explores inclusiveness and exclusiveness in the cultivation of history in terms of choice of subject matter, access to information and dissemination, agency in creating ‘authentic’ historical knowledge – to mention but a few of the meta-level questions we hope to address in conversations with historians in the context of their relevant empirical work.