Outta Trust? (Post-)Pandemic Trust and Democratic Resilience in the Balkans 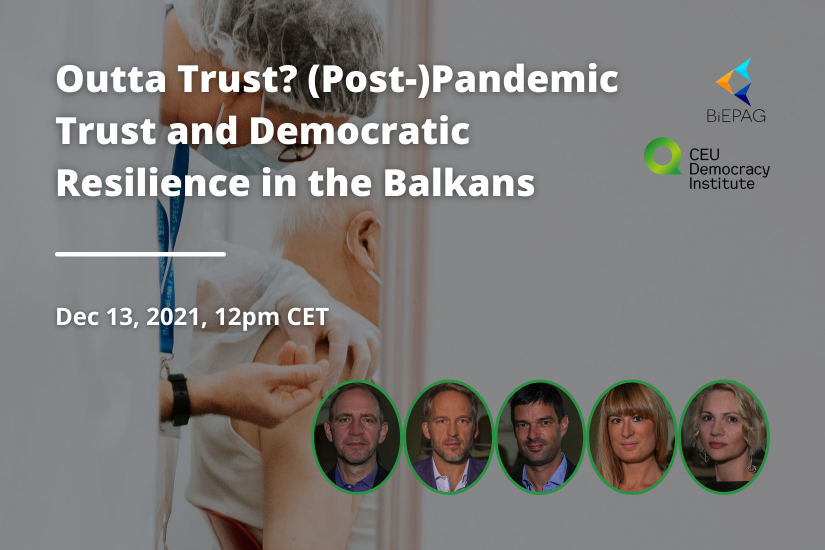 The CEU Democracy Institute and the Balkans in Europe Policy Advisory Group cordially invite you to the online launch of the policy brief: ‘Outta trust? (Post-)pandemic trust and democratic resilience in the Balkans.’

The latest BiEPAG study, based on a public opinion poll carried out in the six countries of the Western Balkans, shows that the pandemic has exacerbated the region’s issues with trust in public institutions even further. The analysis finds that the reticence of publics to undergo vaccination is directly linked with mistrust in governments, supporting last year’s research by BiEPAG that warned about the wide diffusion of coronavirus-related conspiracy theories in the region and their relationship with vaccine scepticism. However, the study also identifies a ‘constituency of change’ with similar characteristics across the region: a picture that opens space to invest trust in new actors able to advance genuine progressive causes in South East Europe, beyond and instead of captured institutions and the respective party establishments.

The event will be streamed live on the Institute’s Facebook page.

Tena Prelec, PhD, BiEPAG member, is Research Fellow at the Department of Politics and International Relations (DPIR), University of Oxford. Her research focuses, broadly, on issues of good governance and anti-corruption, with a specific focus on how transnational kleptocracy is enabled by the global financial architecture. At present, she is conducting work on Russian foreign policy and illicit financial flows in collaboration with the University of Exeter, UK, while also looking into the specific form kleptocracy takes in South Eastern Europe as a Fellow of the Centre for Advanced Studies of the University of Rijeka, Croatia. She is also an established analyst on the Western Balkans, including as Region Head at Oxford Analytica and Research Associate at LSEE-Research on South Eastern Europe (London School of Economics and Political Science). Other research interests include transnational authoritarianism, academic freedom, and the intersection between governance and geopolitics.

Vedran Dzihic, PhD, BiEPAG member, is a Senior Researcher with the Austrian Institute for International Affairs (OIIP), Co-Director of the Center for Advanced Studies (Rijeka), and Senior Lecturer at the Institute for Political Sciences, University of Vienna and at the Vienna Master of Applied Human Rights at the University of Applied Arts, Vienna. Vedran is founder and Executive Board member of IDESE – Institute for Democratic Engagement Southeast Europe. He has been an Austrian Marshall Plan Fellow at the Center for Transatlantic Relations, School of Advanced International Studies (SAIS) at the John Hopkins University, Washington. He currently coordinates the Jean Monnet Network „Western Balkans to EU“ and leads a project on transatlantic approaches to the Western Balkans supported by the Austrian Marshall Plan Foundation. He is board member of the Austrian Community TV OKTO.

Jelena Vasiljevic, PhD, BiEPAG Member, is Research Associate at the Institute for Philosophy and Social Theory. Her background is in political anthropology and citizenship studies. She has written on culture and citizenship debates, transformations of citizenship in the post-Yugoslav states, memory politics, and media narratives during the Yugoslav wars of the 1990s. Her current research interests lie in politics of solidarity, active citizenship and social movements in the Balkans. She was a Research Fellow at the University of Edinburgh, working on an ERC – funded project on citizenship transformations in the former Yugoslav states (CITSEE) and a Research Fellow at the Centre for South East European Studies, University of Graz.

Marko Kmezic, PhD, BiEPAG blog editor, is Lecturer and Senior Researcher at University of Graz, Center for Southeast European Studies. He has studied law at the University of Belgrade, and European integrations and regionalism at the University of Graz. He has worked with the Belgrade Centre for Human Rights from 2006 until 2008. He is the author of “EU Rule of Law Promotion: Judiciary Reform in the Western Balkans” (Routledge, 2016), and co-editor of “Stagnation and Drift in the Western Balkans” (Peter Lang, 2013).