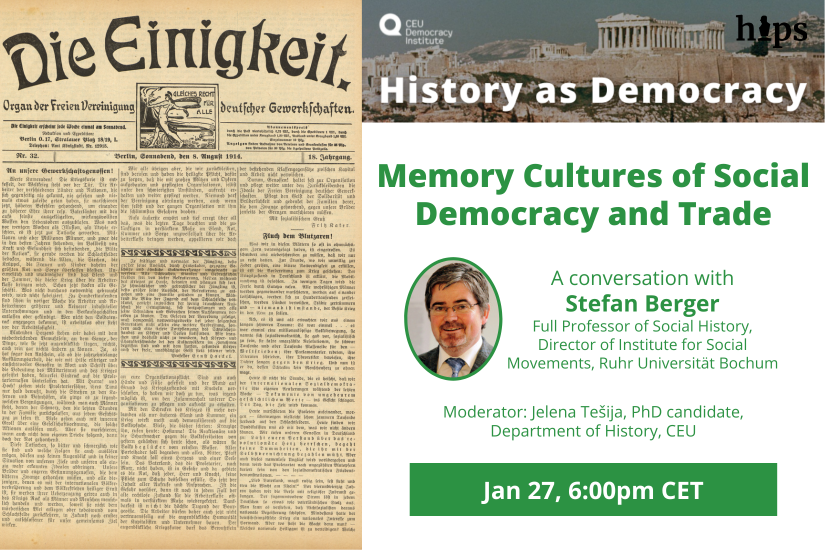 The Democracy in History Workgroup of the CEU Democracy Institute invites you to a conversation with Stefan Berger.

Please note that it's an online event. You will be able to follow it here.

Social Democracy is sometimes used to describe a family of political parties. However, it can also be seen as a political outlook which seeks to extend democracy to the social and economic spheres. It stands as a historically important addition to the tradition of political democracy. Between 2017 and 2021 Stefan Berger chaired a commission of the German Trade Union Confederation (DGB) on the topic of ‘Memory Cultures of Social Democracy’. The task was to examine knowledge on those memory cultures in Germany, locate the specific gaps, and assess how useful memory cultures were as a political resource for the contemporary trade union movement. In this conversation, Berger will present some of the key results of the commission's work and report on some of the initiatives that have been taken since to strengthen the memory cultures of social democracy, both in Germany and transnationally. Together we will examine how memory historians can be active as engaged historians and intellectuals intervening in public political discourses and discuss the merits of such engaged history writing, which has a long tradition in relation to the history of the labor movement.

Stefan Berger is a Full Professor of Social History and Director of the Institute for Social Movements at Ruhr Universität Bochum in Germany. He is also executive chair of the Foundation History of the Ruhr – a public-private foundation with support from major German companies, trade unions, and the state of North-Rhine Westphalia. Furthermore, he is an honorary professor at Cardiff University in the UK. After taking his Ph.D. at the University of Oxford, he worked for more than 20 years at different British universities. His last position was Professor of Modern German and Comparative European History at the University of Manchester. In 2011 he moved to Bochum. He has published widely on the history of the labor movement, social movements, the history of deindustrialization, industrial heritage, memory studies, nationalism studies, the history of historiography, and historical theory. To date, he has published 7 monographs and edited more than 40 special issues of journals and edited collections. His most recent monograph is: History and Identity: How Historical Theory Shapes Historical Practice, Cambridge University Press, 2022.

This lecture is organized as a part of History as Democracy? project.