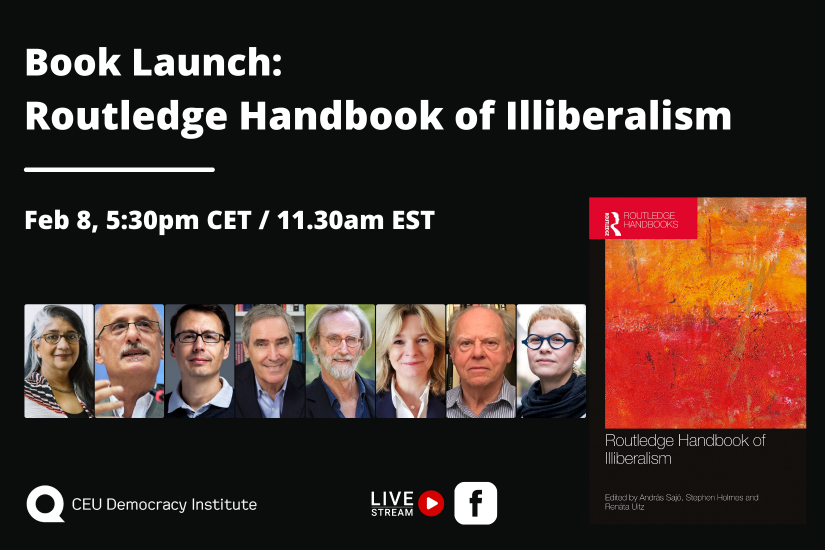 The Routledge Handbook of IIliberalism is the first authoritative reference work dedicated to illiberalism as a complex social, political, cultural, legal, and mental phenomenon.

Although illiberalism is most often discussed in political and constitutional terms, its study cannot be limited to such narrow frames. This Handbook comprises sixty individual chapters authored by an internationally recognized group of experts who present perspectives and viewpoints from a wide range of academic disciplines. Chapters are devoted to different facets of illiberalism, including the history of the idea and its competitors, its implications for the economy, society, government and the international order, and its contemporary iterations in representative countries and regions.

This panel discussion, co-convened by the CEU Democracy Institute and the CEU Department of Legal Studies, will situate the volume and its intellectual project in the context of attacks on political liberalism – historic and contemporary.

Shalini Randeria, President and Rector of CEU, is an American-born Indian social anthropologist/sociologist. She has had a distinguished academic career at institutions of higher education across Europe. She holds the Excellence Chair at the University of Bremen, where she leads a research group on “soft authoritarianisms”. She was educated at the Universities of Delhi, Heidelberg and Oxford, where she belonged to the first cohort of women Rhodes Scholars. She received her PhD and her Habilitation from the Free University of Berlin. She has published widely on the anthropology of globalization, law, the state and social movements. Her research on soft authoritarianism; democracy and demography; forced displacement and dispossession; and the politics of (un)accountability has been carried out in collaboration with historians, political scientists and legal scholars. Her influential podcast series, Democracy in Question, went into its third season in autumn 2021.

Mathias Möschel is Head of the Department of Legal Studies at CEU. His research, teaching and publications fall broadly in the field of comparative (constitutional) law, international human rights law and non-discrimination law, mainly from a critical race theory and gender perspective. Prior to coming to CEU, he held research and teaching positions at University of Paris Ouest Nanterre La Defense, New York University and at the Institut de Droit Compare of University of Paris II (Pantheon-Assas). He has also worked at the European Commission and as an attorney in a California (Silicon Valley) law firm. Besides his academic qualifications, Mathias is also admitted to the New York Bar.

Michael Ignatieff served as President and Rector of CEU between 2016 and 2021, the turbulent years which saw CEU's expulsion from Budapest and its re-establishment in Vienna. He now is a Professor in CEU's Department of History. He came to CEU after serving as Edward R. Murrow Chair of Press, Politics, and Public Policy at Harvard University’s John F. Kennedy School of Government. An international commentator on contemporary issues of democracy, human rights, and governance and a Canadian citizen, Ignatieff is also an award-winning writer, teacher, former politician, and historian with a deep knowledge of Central and Eastern Europe. He has held academic posts at Kings College, Cambridge, the University of Toronto and the University of British Columbia, and served in the Canadian Parliament and was Leader of the Liberal Party.

Stephen Holmes (co-editor) is Walter E. Meyer Professor of Law at New York University. His research centers on the history and recent evolution of liberalism and antiliberalism in Europe, the 1787 Constitution as a blueprint for continental expansion, the near-impossibility of imposing rules of democratic accountability on the deep state, the traumatic legacy of 1989, and the difficulty of combating jihadist terrorism within the bounds of the Constitution and the international laws of war. Besides numerous articles on the history of political thought, democratic and constitutional theory, state building in post-Communist Russia, and the war on terror, Holmes has written several books, including The Cost of Rights: Why Liberty Depends on Taxes, co-authored with Cass Sunstein, The Matador’s Cape: America’s Reckless Response to Terror, The Beginning of Politics, co-authored with Moshe Halbertal, and The Light that Failed. A Reckoning.

Helena Rosenblatt (contributor) is Professor of History at The Graduate Center, City University of New York, and recent recipient of the Guggenheim Foundation Fellowship. She is an intellectual historian with a particular interest in French political and religious thought. She is the author of the books Rousseau and Geneva from the First Discourse to the Social Contract, 1749-1762, Liberal Values: Benjamin Constant and the Politics of Religion, and The Lost History of Liberalism from Ancient Rome to the Twenty-First Century. She is the editor of The Cambridge Companion to Constant, co-editor (with Raf Geenens) of French Liberalism from Montesquieu to the Present Day, and co-editor (with Paul Schweigert), of Thinking with Rousseau from Machiavelli to Schmitt.

András Sajó (co-editor) is a former judge at the European Court of Human Rights, Strasbourg (2009-17), Senior Research Fellow at the CEU Democracy Institute, and University Professor at CEU. He was the founding dean of Legal Studies at CEU. In addition to his stature as a prominent constitutionalist, he is also a distinguished scholar in the human rights field, including media regulation. He has been extensively involved in legal drafting throughout Eastern Europe. In addition, he participated and/or advised in drafting the Ukrainian, Georgian, and South African constitutions. He is a member of the American Law Institute (1997) and the Hungarian Academy of Sciences (1995). He also held many positions in public service. He holds Honorary Doctorates from the European University Institute (Firenze) and Ilia State University (Tbilisi).