Three Ways Not to Think About the Rule of Law 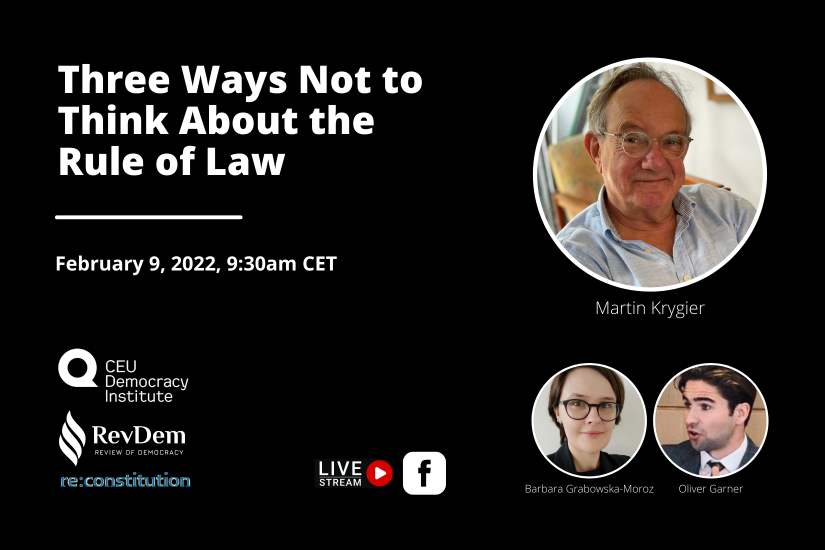 In recent decades, the rule of law has become a ‘hurrah term’ throughout the world, likely used more often and by more people than ever before. This rhetorical omnipresence has given it a great boost in brand recognition, but it has not made any clearer what the concept might mean, what the phenomenon might be, or why anyone should care.

Although the term’s fluidity might even be part of its charm to some who deploy it, it has a price. For while we say a lot about the subject, we don’t always think particularly well about it. Yet it is hugely important to think about, and I believe there are better ways.

In this lecture, I will discuss three conventional ways of approaching the rule of law, each of which seems to me misconceived and misleading. The first starts in the wrong place. The second goes on in the wrong way. The third misconstrues the point and destination of the quest. No wonder, as Flannery O’Connor once wrote of a good man, the rule of law is hard to find..

I propose alternatives to each of these ways. They still won’t make the search for the rule of law a walk in the park. However, they might help us avoid being, time and again, mugged by reality.

The lecture will be streamed live on the Institute’s Facebook page.

Martin Krygier is Gordon Samuels Professor of Law and Social Theory, UNSW Sydney; Senior Research Fellow, Rule of Law Program, CEU Democracy Institute, Budapest; and Honorary Professor, RegNet, Australian National University. He is a Fellow of the Academy of Social Sciences in Australia, and Member of the Order of Australia. He was awarded the Dennis Leslie Mahoney Prize in Legal Theory in 2016. He writes extensively on the rule of law and its challenge(r)s. Apart from journal articles and book chapters, his books include Between Fear and Hope; Civil Passions;  Philip Selznick. Ideals in the World and, as editor and co-editor and contributor, Spreading Democracy and the Rule of Law?; Rethinking the Rule of Law after Communism; Legality and Community; The Rule of Law after Communism; Marxism and Communism. Posthumous Thoughts on Law, Politics and Society; Bureaucracy: The Career of a Concept. Anti-Constitutional Populism, co-edited with Adam Czarnota and Wojciech Sadurski, will be published by Cambridge University Press in March 2022.  He also writes for journals of ideas and public debate.

Barbara Grabowska-Moroz is a research fellow at CEU Democracy Institute. In 2018-2021 she was a postdoc researcher in the RECONNECT project (University of Groningen, the Netherlands). In 2010-2018 she worked as a lawyer and project coordinator in the Helsinki Foundation for Human Rights (Warsaw, Poland), and as a legal expert in FRANET (multidisciplinary research network of the EU Fundamental Rights Agency). She graduated from the Faculty of Law and Administration at Warsaw University (M.A., 2010) and Central European University (LL.M., 2012). In 2017 she defended her PhD thesis on the oversight of the special security services in Poland.

Oliver Garner is an Editor of the CEU Democracy Institute’s journal, Review of Democracy (RevDem). He is responsible for the Rule of Law section. He is also a Research Fellow in the Rule of Law in Europe at the Bingham Centre for the Rule of Law, British Institute of International and Comparative Law. He holds a B.A. in Jurisprudence from the University of Oxford, and an LL.M. in Comparative, European and International Laws and a Doctorate in Laws from the European University Institute (EUI).  His work has been published in the Cambridge Yearbook of European Legal Studies, the International Journal of Constitutional Law, and the European Journal of Legal Studies, and on online publications including the European Law Blog, Verfassungsblog, and the UK Constitutional Law Association Blog.