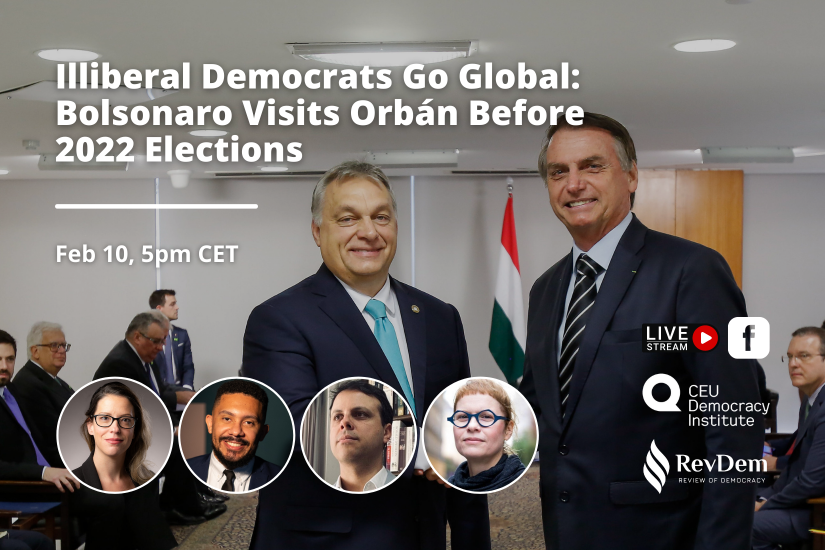 Just a few weeks before April national elections in Hungary, Jair Bolsonaro comes to Budapest to meet Viktor Orbán on February 17. After this illiberal tour, which includes a visit to Vladimir Putin, Bolsonaro himself is to face Brazilian voters in October 2022. In preparation, the CEU Democracy Institute and its Review of Democracy convenes a panel discussion with multiple disciplinary perspectives on Bolsonarism. In light of the challenges faced by democracy in Brazil, experts will address issues like the impact of authoritarian international law on the globalization of illiberal democracy, the illiberal war on human rights and gender equality, modes of constitutional erosion, and the support for charismatic leadership among low-income voters in illiberal and authoritarian settings.

The discussion will be streamed live on the Review of Democracy’s Facebook page. If you are interested in following it, please join the Facebook event as well.

Emilio Peluso Neder Meyer is a Tenured full-time Associate Professor of Constitutional Law at the Federal University of Minas Gerais, Brazil, and a Research Fellow of the Brazilian National Council for Scientific and Technological Development (CNPq). His most recent book is Constitutional Erosion in Brazil (Hart Publishing). He is the Director of the Study Center on Transitional Justice of the Federal University of Minas Gerais. He was the former General Secretary of the Latin America Transitional Justice Network (2016-2017). He was a Visiting Researcher at the King’s College London Brazil Institute (2014-2015). In 2013, he was awarded by the Brazilian Ministry of Education’s CAPES Foundation with the prize for the best Law thesis in Brazil, entitled Ditadura e Responsabilização.

Thiago de Souza Amparo is a professor at Getulio Vargas Foundation Law School and International Relations School (FGV) in São Paulo, Brazil, teaching courses on human rights, international law, public policy, and discrimination law. He is a lawyer, with a bachelor's degree from Catholic University in São Paulo (PUC-SP), a master's degree in human rights (LLM) from the Central European University (Budapest, Hungary) and a doctorate from the same university. He was a visiting researcher at Columbia University (New York - United States) and a postdoctoral fellow in 2021 at New York University (NYU). Expert in constitutional law, public and business policies on diversity and anti-discrimination, as well as international public law. He is a weekly columnist for the Folha de S. Paulo newspaper and participates in the Legal Alliance for Racial Equity with Brazil's top law firms. He was Deputy Secretary for Human Rights and Citizenship at the City of São Paulo, between January and May 2017.