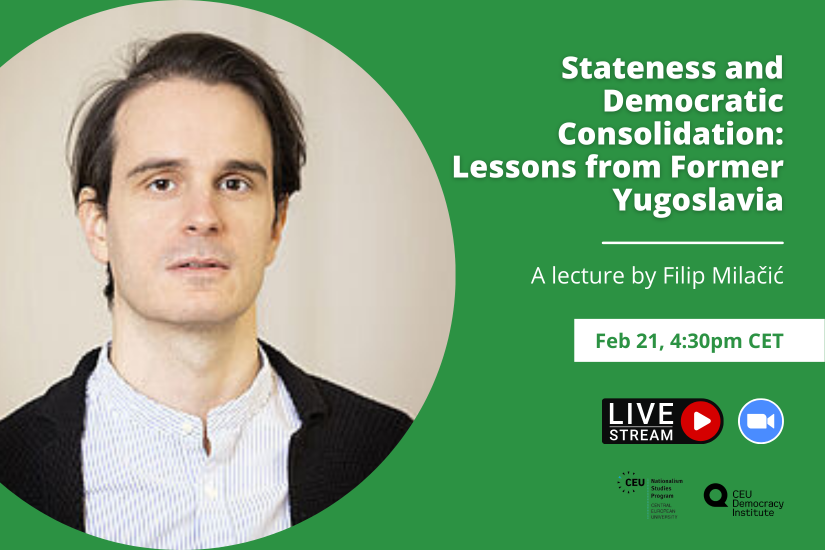 The De- and Re-Democratization Workgroup of the CEU Democracy Institute and the CEU Nationalism Studies Program invite you to this presentation.

With respect to the relationship between the state and democracy, the scholarly research thus far has mainly oscillated between two perspectives: “no state, no democracy” vs. “no democracy, no state”. Using the example of former Yugoslav republics, I offer an alternative approach. Contrary to the “no state, no democracy” perspective, I argue that an unresolved stateness problem does not necessarily prevent the emergence of a democracy. However, it could slow down or halt its consolidation and even facilitate democratic backsliding, which are concerns that the “no democracy, no state” perspective seems to be neglecting.

Specifically, I argue that an unresolved stateness problem creates conditions that facilitate the violations of democratic rules. First, its existence creates a fertile ground for political entrepreneurship that is mainly based on ethno-nationalist appeals. Indeed, the dominance of national question in the political system enables political entrepreneurs to successfully play the nationalist card and introduce ‘enemies and traitors’ categorization in political competition. In such a context, the (alleged) challenges to the state and nation justify and legitimize violations of democratic rules, whereas the narrative about national destiny minimizes the resistance to power grabs. In other words, political entrepreneurs combine national identity politics and clientelism to make the playing field uneven; denigrate the opposition, the CSOs, and the independent media by branding them as traitors to national interests; personalize power and dismantle checks and balances by portraying themselves as protectors of national identity, etc.

Second, such a focus of the political actors on the matters of state and nation has the potential to engender a toxic polarization. Polarization that revolves around the national identity based political divisions is a fertile ground for the emergence of the “us” vs. “them” relation and thus of a toxic polarization (especially since polarization is also strategically deepened by political entrepreneurs). In a political system characterized by toxic polarization, even issues that are not inherently partisan become politicized. This furthermore causes political stalemate that translates into the lack of democratic reforms and stagnation. Moreover, the existence of a toxic polarization additionally facilitates the above described attempts to subvert democracy since voters tolerate or even encourage policies that erode democratic norms because the opposing party’s policies are perceived as a threat to the nation.

I believe that my theoretical framework, which argues that the unresolved stateness problem undermines the process of democratic consolidation and facilitates democratic backsliding, could be applied to other countries within the post-communist context that still find themselves in a democratic transition process and thereby face the problem of disputable borders and/or unfinished nation building.

Filip Milačić is Senior Researcher for Democracy and Society at the Friedrich Ebert Stiftung, Vienna. He has studied political sciences and Eastern European history at the University of Heidelberg, receiving his PhD from Humboldt University. Previously, he worked for the Organization for the Security and Co-operation in Europe (OSCE) as well as at the University of Rijeka, University of Montenegro and in German Bundestag. He is also a visiting fellow at the Institute for Human Sciences in Vienna.

At Közép-európai Egyetem (address: 1051 Budapest, Nádor u. 9.) (“CEU” or the “University”) we place great emphasis on the protection of your personal information and compliance with the EU General Data Protection Regulation (GDPR). If you would like to learn more on how we use the personal data shared with us, please see our Privacy Notice here.