What Lessons From the Yugoslav Wars Can We Use for Ukraine Today? 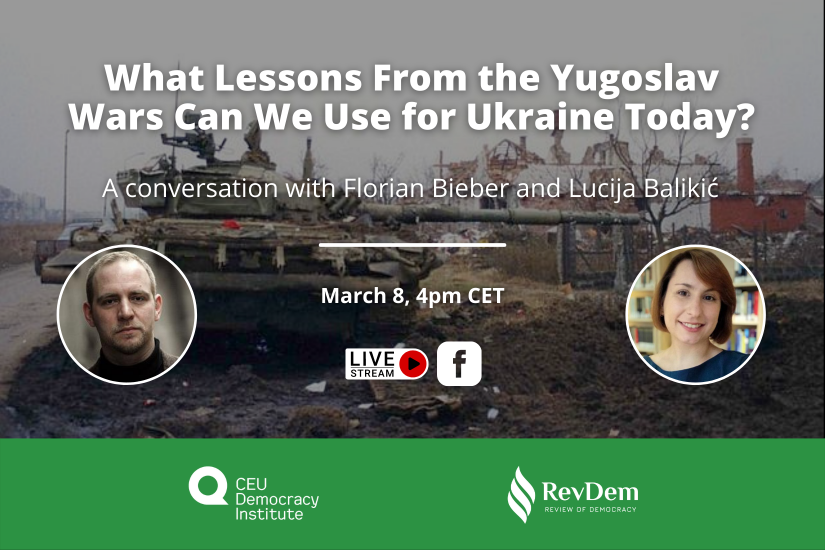 Putin's claims of 'genocide' conducted in Ukraine, view of Russia's place in history and the illegitimacy of Ukrainian nationhood remind many scholars of the late-1980s Yugoslavia. In a conversation, Florian Bieber and Lucija Balikić will compare the two crises with special regard to Western reactions, treatment of national minorities by their host states and principles of international law applied during these armed conflicts.

Join the CEU Democracy Institute and its Review of Democracy to hear more about the comparison between the break-up of USSR and Yugoslavia and putting the current crisis in historical perspective.

Florian Bieber is a political scientist working on inter-ethnic relations, ethnic conflict and nationalism, focusing on Southeastern Europe. He is a Professor in South East European Studies at the Center for South East European Studies of the University of Graz. Previously, he was a Lecturer in East European Politics at the Department of Politics and International Relations of the University of Kent, Canterbury, UK. From January to May 2009, he held the Luigi Einaudi Chair at Cornell University, Ithaca, New York and in Spring 2010, he was a visiting fellow at LSEE – Research on South Eastern Europe at the London School of Economics. He is the Editor-in-Chief of Nationalities Papers.

Lucija Balikić is a doctoral candidate at the Department of History, CEU, and an Assistant Editor at Review of Democracy. She is a graduate of University of Zagreb, CEU and was a visiting student at the Department of History at the University of Southampton, UK. Currently, she is also working as a research assistant on the research project "Neverending Story? Mapping Crisis Discourses in East Central Europe, 1918-2020" at the CEU Democracy Institute. She researches the body politics in the interwar Yugoslavia, through the prism of the racial science, integral Yugoslavist intellectuals and the Sokol gymnastics movement.