Historical Politics and the Russian Invasion of Ukraine 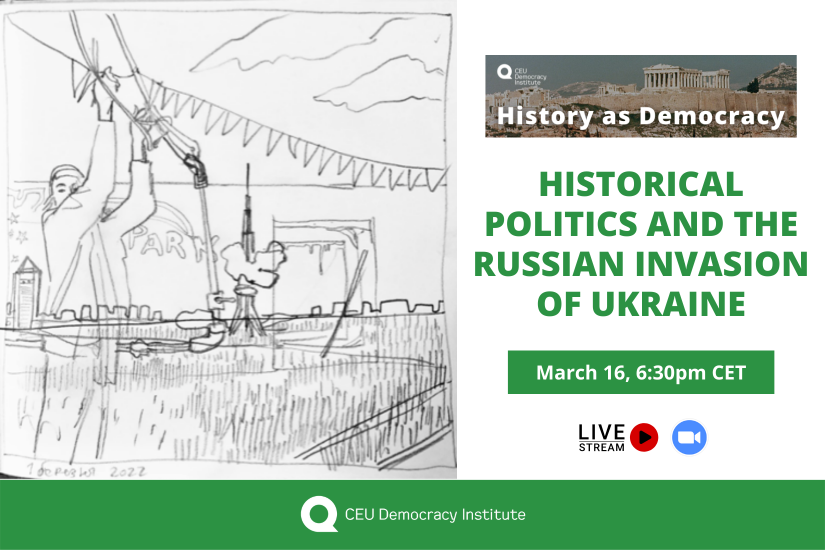 The Democracy in History Workgroup of the CEU Democracy Institute cordially invites you to a conversation with Alfred J. Rieber, Alexander Semyonov and Ostap Sereda, moderated by Oleksii Rudenko (PhD Candidate, Department of History, CEU).

To receive the Zoom-link, please RSVP at democracyinhistory@ceu.edu

History has taken prominence in Vladimir Putin’s and his Kremlin environ’s ideology of Russia’s war of aggression against Ukraine and its people.  The rhetoric Putin employed in his speech prior to announcing the large-scale invasion presented a distorted perception of Ukrainian history and the recent past, significantly manipulating facts and interpretations. At the same time, the current crisis is a long-term expression of conflicting versions of historical politics in the West, Russia and Ukraine that need to be kept in mind as we seek to explain Russia's invasion. We will discuss the issues connected with a memory politics established on abuses of history and Putin’s neo-imperial vision of Russia’s ’mission' in Eastern Europe in this wider context. We will also touch upon issues connected with academic freedom in Russia and the consequences that the Russian attack on Ukraine will bring to the world and its system of security.

Alfred J. Rieber is an emeritus professor of history (University of Pennsylvania and Central European University) and lectured widely across the United States and Europe. He is a scholar of imperial and Soviet Russia, and the comparative history of empires and borderlands. Rieber’s distinguished teaching career in these areas has been recognized by several teaching awards. The many books he has written or edited include Stalin and the French Communist Party, 1941-1947; The Politics of Autocracy; Merchants and Entrepreneurs in Imperial Russia; Perestroika at the Crossroads; Forced Migration in Central and Eastern Europe, 1939-1950. The first volume of his recent trilogy exploring imperial contestation in Eurasia, Struggle for the Eurasian Borderlands. From the Rise of Early Modern Empires to the End of the First World War (Cambridge University Press, 2014) was awarded the Bentley Prize of the World History Association.

Alexander M. Semyonov, Ph.D. in History, has previously taught at Smolny College of Liberal Arts and Sciences (St. Petersburg State University and Bard College), HSE University in St. Petersburg where he chaired the department of history and directed the Center for Historical Research. Semyonov is a co-founder and co-editor of Ab Imperio: Studies of New Imperial History and Nationalism in the Post-Soviet Space and co-editor with Ronald Suny of a book series “Imperial Transformations” (with Routledge). Semyonov held visiting positions at several universities in Europe and North America. He is on the academic board of the Joint Doctoral Program “Global History of Empires” (University of Turin and HSE University) and involved in the London School of Economics’ Paulsen project “Russia in the World.” His recent research project is focused on history of imperial transformations and citizenship in historical perspective.

Ostap Sereda received his Ph.D. in comparative history from the Central European University (Budapest) in 2003. He is an associate professor of history at the Ukrainian Catholic University in Lviv. Since 2012 he has also taught as a visiting professor at the Central European University. His publications deal with the political discourses and cultural practices of nationalism in 19th-century Austrian Eastern Galicia, and with cultural politics and musical theater in Russian-ruled Kyiv in the second half of the 19th century.

This event is organized as a part of History as Democracy? project:

Image in cover: Inga Levi, The First of March 2022: Decoration of the Bombshelter, Lviv / The shelling of the TV tower by the Russian occupiers, Kyiv, 2022, pencil