The Contested: Repatriation politics in a global comparative polyphony 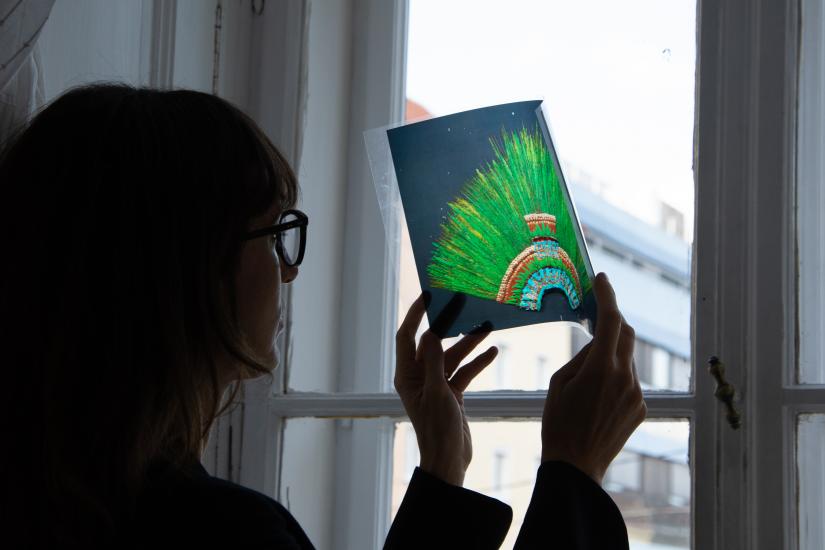 In this research seminar the restitution histories of looting by Nazi and colonial powers is unfolded through the case of Montezuma’s Crown in Vienna. It is often stated that Austria did not have any colonies. The Habsburg Empire, like the Roman Empire before it, is somehow assumed to have spread naturally across Europe and the Balkans, encountering no resistance, and it is difficult for the European historical imagination to classify such a process as colonization. Most Europeans know little about the Austrian colonization of Mexico, and if they do it is seen merely as part of Habsburg political puppetry. Colonialism “proper” is thought by many Austrians and Germans to be something undertaken by the British, Dutch, Belgians, French, and Spanish. It is therefore by making a comparison to the Holocaust that a sense of the organized resource extraction, cultural destruction, and genocide involved in colonialism can be brought home to those European imaginations that struggle to understand what it might share with the Shoah. It is the history of 20th Century repatriations within Khadija von Zinnenburg Carroll’s wider ranging new book The Contested Crown: Repatriation Politics between Mexico and Europe (Chicago University Press, 2022) that the seminar will focus on.

Khadija von Zinnenburg Carroll is an artist and historian currently leading the project REPATRIATES: Artistic Research in Museums and Communities in the process of Repatriation from Europe (ERC 2020-2025). In 2022 she joined the History Department at CEU from being Professor and Chair of Global Art at the University of Birmingham. Her films and installations have been shown internationally including at the Venice, Marrakech, and Sharjah Biennales, ZKM, Manifesta, Taxispalais, Extracity, and Royal Museums Greenwich. She is the author of the books Art in the Time of Colony (2014); The Importance of Being Anachronistic (2016), Botanical Drift: Protagonists of the Invasive Herbarium (2017); Bordered Lives: Immigration Detention Archive (2020); Mit Fremden Federn: El Penacho und die Frage der Restitution (2022); The Contested Crown: Repatriation Politics between Mexico and Europe (2022) and she is an editor of the journal Third Text.www.kdja.org.

We will meet in room B-421, on the 4th floor - but offer hybrid mode in case you wish to join online:

You are also warmly welcome for the film-screening of

At the Kunstlerhaus among a series of others, after a conversation in the cinema, starting at 8 pm, on the same day, March 22, Tuesday. The film will be screened around 9 pm, entry is free.

Prof Zinnenburg Carroll wrote, shot, edited and did the voice over. She worked with two Austrian artists on the sound and images and the Viennese composer Martin Siewert has curated it into a series of films he’s made the music for. It was commissioned by the Sharjah Art Foundation for their 14th Biennale and was shot in a fishing village in the Persian gulf.

Reflecting Relational Traces: Desert Ice Factory is cinema made of sun, wind, heat and other non-human agencies, found on the site of a ruined desert ice factory in Sharjah. Through the watery lens of the ocean the film meditates upon the traces of relations between materials and forces at play in a specific space, observed and recorded in abstract microscopic detail.

In a review of the exhibition EcoCinema at Taxispalais where it screened as the opening film, the critic Georgia Holz writes: “the abstract, poetic counter-proposal by Nikolaus Gansterer and Khadija von Zinnenburg Carroll. In “Reflecting Relational Traces: The Desert Ice Factory” (2019), filmed in the ruins of a former ice factory in the Sharjah desert (and, by the way, the only “art film” in the narrow sense of the term), the camera brings us microscopically close to relics of human activity that testify to the conflicts that follow the clash of human and non-human entities .”  Georgia Holz, Hyperallergic