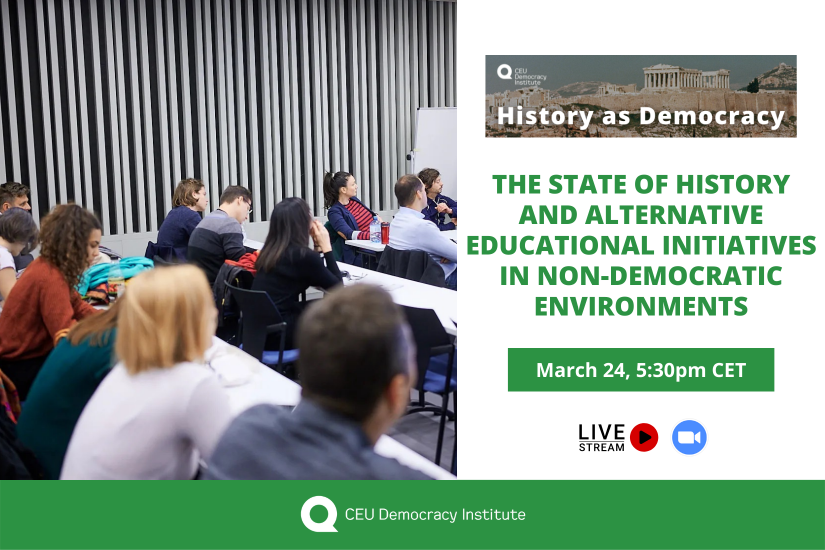 The Democracy in History Workgroup of the CEU Democracy Institute cordially invites you to a conversation with Noémi Lévy-Aksu, Daniel Palm and Leila Alieva, moderated by Bence Bari (PhD candidate, CEU Department of History).

The roundtable discussion looks at the academic state of affairs and independent educational initiatives in Hungary, Turkey and the lands of the Caucasus – political and social contexts seldom described as ones with ‘anti-democratic’, ‘illiberal’ or ‘soft authoritarian’ tendencies. In such contexts, the central governments may corrupt academic and educational freedom and push a dominant historical narrative that supports their political and ideological goals. As opposed to this, academics and other professionals may rely on remaining freedoms and funding opportunities to initiate alternative educational projects and disperse their historical knowledge and narratives. Our main aim is to compare the situations of academics in these contexts, those individual or collaborative projects initiated independently of the state, to map the difficulties and the possibilities provided by the local circumstances, to share experiences, to reflect on the possible fate of such initiatives and to allow room for transnational networking.

Noémi Lévy-Aksu is the director of the “Memory and Peace Studies” team at Hafıza Merkezi (Truth, Justice, Memory Center) in Istanbul, where she coordinates projects in relation with collective memory, transitional justice and peace activism. She was an assistant professor in history at Boğaziçi University (Istanbul) until 2017, when she was dismissed for signing the Declaration for Peace. After her dismissal, she held temporary positions at Birkbeck College and the LSE, and she was a fellow of the Re-constitution program in 2019-2020. A founder and trustee of  the Centre for Democracy and Peace Research (CDPR), a London-based organization which supports knowledge production and alternative academic initiatives, she is actively involved in the network of solidarities academies in Turkey. She is currently affiliated to the GRK-2571 Empires research program at Freiburg University.

Daniel Palm is an advisor for learning and teaching innovation at the University for Continuing Education Krems and, as of April first, affiliated Researcher at the Democracy Institute at the Central European University. Before joining the CEU DI for this summer, he worked extensively on digital education projects, working with NGOs and Foundations in Germany. Besides working on Open Educational Ressources, he currently prepares a project on critical globalization studies, focusing on state elites’ self-privileging strategies in Hungary and Nicaragua.

Dr. Leila Alieva is a Richard von Weizsacker Fellow at the Robert Bosch Academy and an affiliate of Russian and East European Studies, Oxford University School of Global and Area Studies, previously Senior Common Room member of St. Antony’s College. She co-founded and headed two think-tanks in Baku, Azerbaijan, which implemented the projects on reviving and consolidating the memory on the history of the first democratic  republic of the country ( 1918-1920) She held research or teaching fellowships at Harvard University (1993-1994), UC Berkeley (2000), Woodrow Wilson Center -Kennan Institute- (1995) SAIS -Johns Hopkins University- (2001), NATO Defense College (NDC) in Rome, Italy (2005) at the National Endowment for Democracy in Washington DC, (2007) Institute Fur Kulturwissenschaften (IFK) in Vienna (2018). Her research covers conflicts, political economy of natural resources, EU and NATO integration and democratization in the Caucasus, Russia and former Soviet Union.

This event is organized as a part of the History as Democracy? project: