Superheroes and US Foreign Policy: How Popular Culture Shapes the 'War on Terror' 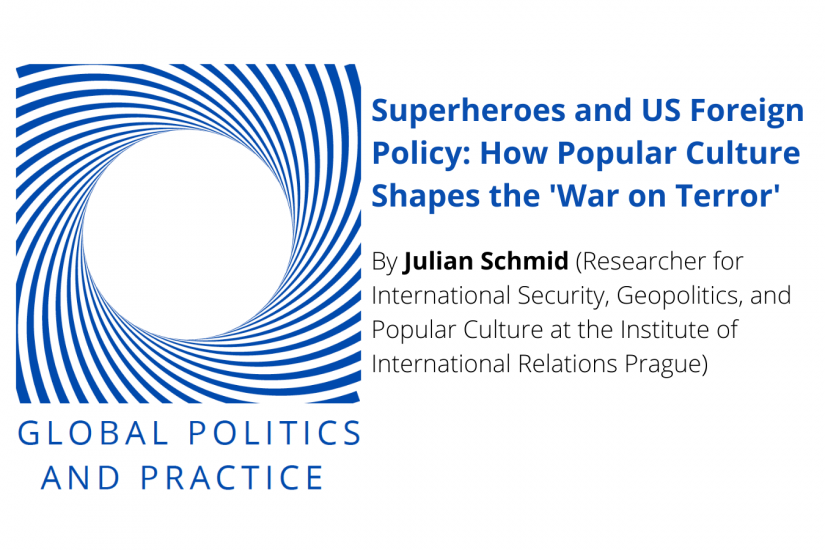 Join the Global Politics and Practice Research Group in their upcoming lecture.

ABSTRACT / Hollywood has a long tradition of shaping and co-producing the discursive material that feeds into broader discourses of security and foreign policy. In the years since‘9/11’ it has been the superhero genre and the cinematic universes of DC and Marvel that have re-negotiated collective crisis and trauma, and developed fantasies of protection, safety, and resurrection against the backdrop of the ‘War on Terror’. I will address the question of how Hollywood’s superhero films have been, and continue to be, (co-)constituting security discourses within an American and international context. By drawing on academic debates about visuality, virtuality, and cultural immersion I will demonstrate how films as political artefacts do not only mirror politics but also blur the line between reality and fiction. Reading the films as inter-textually connected to an infinite number of other political and cultural texts, whilst addressing the context of production and reception, makes it possible to see how specific discourses on terrorism, violence, and threat are not only legitimised but furthermore popularised on a global scale. I will argue the political solutions presented in the films ultimately inform the basis of political reality and normalise what we perceive as the modus operandi of world politics.

BIO / Dr. Julian Schmid is a Researcher for International Security, Geopolitics, and Popular Culture at the Institute of International Relations Prague. His research interests encompass areas such as US Foreign Policy, Terrorism, Surveillance, Political Violence, Popular Culture and World Politics. Julian has been teaching on a variety of subjects within International Relations at the University of Warwick, Virginia Tech, University of Lausanne and Liverpool John Moores University, Sience Po Paris and is currently a Lecturer in US Foreign Policy at Charles University

If you wish to be informed about our future events, please send an email with the subject 'subscribe' to gpp@ceu.edu