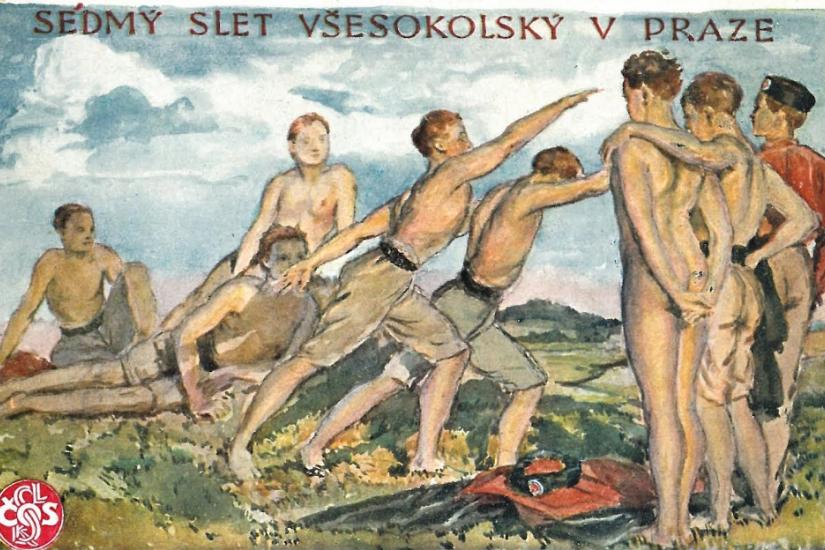 The international conference hosted by the French Research Center in Humanities and Social Sciences, the Czech Academy of Science and co-organized by Pasts Inc., Center for Historical Studies deals with the links between mass gymnastics and biopolitics in the modern history of East Central Europe. In particular, the event focuses on the Sokol [Falcon], a nationalist mass gymnastics association. Founded in Bohemia in the 1860s, Sokol was modelled after the German nationalist gymnastics association Turnverein. Embracing a discourse about Slavic commonality, Sokol associations were adopted by nationalists in multiple contexts of East Central Europe and were widespread in their diasporas, as well. By the 1930s, Sokol associations had a mass membership in Bulgaria, Czechoslovakia, Poland, Romania, and Yugoslavia. The three-day event will bring together scholars studying Sokol gymnastics in these contexts, and encourage them to inquire about the entanglements or even symbiosis between mass gymnastics and biopolitics in interwar East Central Europe as well as about its long-term continuities.

The conference aims to bring new insights on the history of biopolitics and eugenics in East Central Europe. It explores the role of associations, in general, and of mass gymnastics, in particular, in the production and circulation of biopolitical knowledge in this part of the world. The presentations investigate how biopolitics informed the practices of mass gymnastics, and how these practices, in turn, shaped the discourses such as eugenics, biotypology, and race science. Importantly, the Sokol associations in East Central Europe were closely linked, thus proving Anne-Marie Thiesse’s point that few things are as transnational as nationalism.The presentations thus illuminate not only the circulation of biopolitical knowledge on the local level, but also point out to its transnational dimensions. Conversely, a focus on biopolitics enriches the discussion about associations in interwar East Central Europe, which so far dealt with their involvement in various agendas linked to modernisation or language use; our conference, however, investigates the biopolitical goals embraced by these associations, and explores the complex relationship of these associations to the nationalizing states and their biopolitical agendas.

Our conference engages with the recent efforts to rethink the conventional periodization of history in East Central Europe. This emerging body of literature problematizes the events that were traditionally seen as turning points, and that were derived from political history, such as the collapse of the Habsburg Empire in 1918. Instead of interpreting these political events as radical breaks, historians now tease out the continuities of actors, practices, and institutions. Our conference would like to shift the focus of this debate to biopolitics. How much of interwar biopolitics drew on older models and networks formulated within an imperial context? Moreover, can we trace any continuities between biopolitics in the interwar period and in the postwar state socialist regimes in East Central Europe? We argue that to discuss these questions we need to see biopolitical theories as embedded in social practices and institutions. In empirical terms, therefore, mass associations such as the Sokol provide an ideal ground for this analysis.