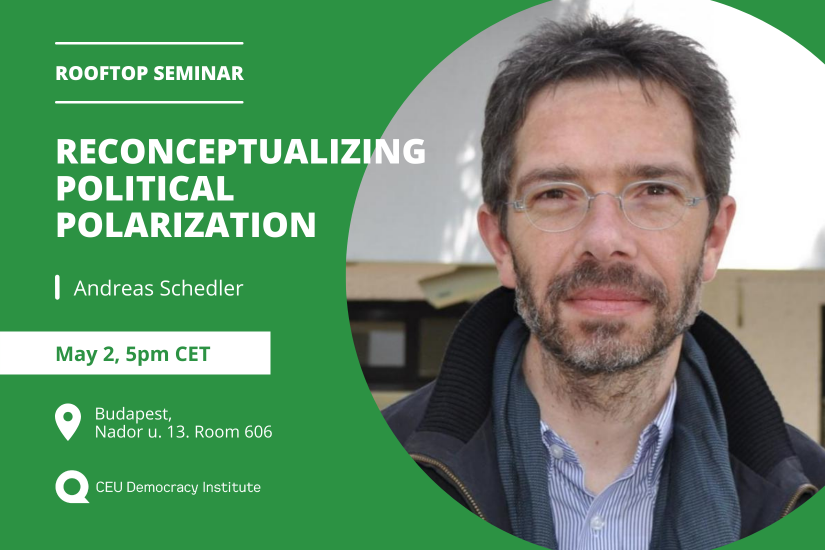 The De- and Re-Democratization Workgroup of the CEU Democracy Institute cordially invites you to its first Rooftop Seminar.

If you would like to attend the seminar, please register here.

Within contemporary debates on the global crisis of democracy, the comparative study of political polarization has turned into a flourishing industry. It has been built on uncertain conceptual foundations, though. With multiple, incongruent meanings competing against each other, the concept lacks a distinctive core. Based on a broad reading of the comparative literature and an analysis of selected influential articles, this paper seeks to remedy the prevalent semantic fragmentation. It reconstructs the meaning of political polarization by developing four propositions. First, contemporary processes of polarization lack what once was considered their defining feature: the presence of self-declared antidemocratic actors. Second, though political polarization is best understood as a type of political conflict, broad strands of polarization research do not study conflict but clusters of individual properties. Third, extant studies of polarization are highly selective in the analytical attention they pay to the building blocks of polarizing conflicts: their protagonists, intensities, subjective attitudes, public expressions, and substantive sources. Fourth, spellbound by the binary distinction between ideological and affective polarization, the literature has tended to obscure a crucial third dimension: mutual fears of democratic subversion.

Andras Bozoki is Professor at the CEU Department of Political Science and Research Affiliate at the CEU Democracy Institute. His main fields of research include democratization, de-democratization, political regimes, ideologies, Central European politics, and the role of intellectuals. In 1989, he participated at the national roundtable negotiations. He was President of the Hungarian Political Science Association (2003-05), then in 2005-06, he served as Minister of Culture of Hungary. He also served as the chairman of the Political Science Committee at the Hungarian Academy of Sciences (2011-17). He was visiting professor at various universities around the world, including Columbia University, Nottingham University, Tübingen University and Bologna University, and he also taught at his native Eötvös Loránd University. He is the (co-)author of almost 20 books, and his articles were published in seven languages.