The Budapest Week then and now - Public talk by the former editors Michael Kovrig, Pablo Gorondi, and Tom Popper moderated by Esther Holbrook. 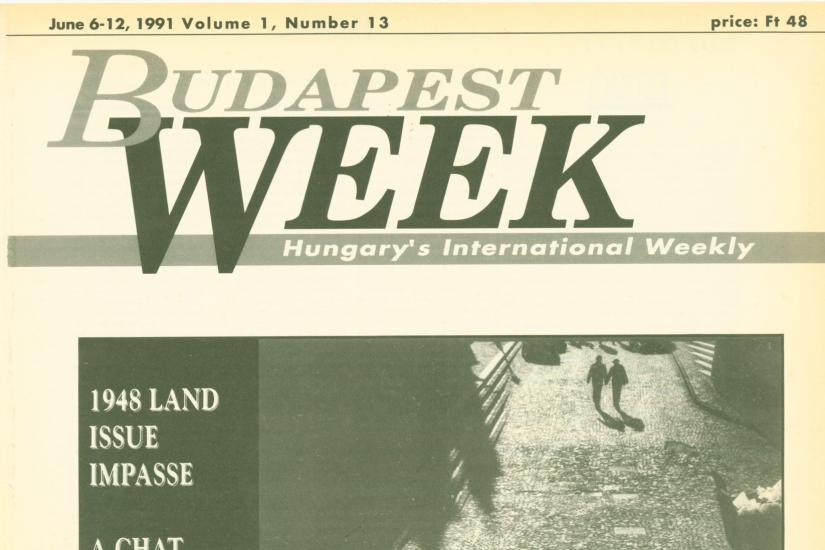 The Budapest Week then and now
Public talk by the former editors Michael Kovrig, Pablo Gorondi, and Tom Popper moderated by Esther Holbrook.

The Budapest Week was a unique and important publication, serving as a witness as well as a live experiment on the Hungarian media landscape in the early 1990s.

Established right after the transition, its weekly editions would cover stories never before in print. Presented from the perspective of foreign and Hungarian journalists acutely aware of local contexts, Budapest Week looked out through wide and hopeful eyes reporting on the signs of the time – an environment where everyone, openly or secretly, looked forward to a great, new future ahead for Hungary.

Thirty years later, the founders of the Budapest Week Steven Carlson and Tibor Szendrei contacted the Vera and Donald Blinken Open Society Archives, and together we launched a common project: Digitization of the first editions of the Budapest Week as part of our archives. Soon the weekly news magazine will have a dedicated homepage where documents collected in relation to this project will be uploaded and shared. Meanwhile, we continue to work hard at tracking down any and all documentation relating to the early years of the paper: live testimonies, recorded interviews, news clippings, its photo archives, and other related publications.

On this occasion, the former editors of the Budapest Week gather to discuss what starting an English-language newspaper in Budapest was like in 1991, the challenges and the rewards, and to consider whether such a publication would even be possible to launch today.

The talk is followed by a Q&A session.

Tom Popper is an award-winning journalist with 10 years of experience as a news editor at US dailies and extensive work for business, policy, and health publications in Europe. Since the early 1990s, he has served as an editor at several English-language publications produced in Hungary, including Budapest Week, Time Out Budapest, and the Budapest Business Journal.

Pablo Gorondi is an editor of Szabad Európa, the Hungarian-language service of Radio Free Europe/Radio Liberty. He has lived in Hungary since 1995. Before that, he was an active member of the Hungarian communities in Buenos Aires and New Jersey. He started as a radio music presenter, worked in the English and Spanish print media and television, and was a correspondent for the AP news agency in Budapest for nineteen years.

Michael Kovrig is a senior advisor to the International Crisis Group. He was previously a Canadian diplomat and foreign service officer who served in Ottawa, China, and at the United Nations, and has also worked for the UN Development Program and as a China analyst. In Hungary, Michael was arts editor and managing editor at Budapest Week, editor of Scene magazine, announcer for Radio Budapest, and staff reporter at the Budapest Business Journal.

Esther Holbrook, a native of Ashland, Oregon, USA has lived in Hungary for the past 24 years. Her first Budapest job was in sales at Budapest Week; one year later, the paper folded.  After some years working at the Roma Sajtóközpont (Roma Press Center) and a host of other gigs, she started working as program coordinator at Central European University’s Center for Religious Studies in 2008, where she has remained ever since. Esther is also an occasional writer, actress, and voice artist, performing regularly with the local showcase Provocative Giraffe.