Ukraine’s Integration and Reconstruction: How To Prepare the EU? 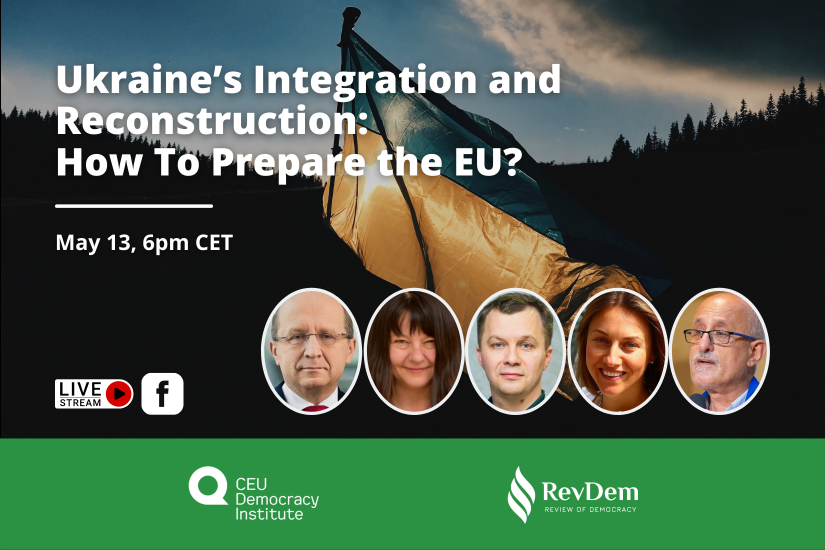 The EU membership of Ukraine will be one of the key issues of the post-war settlement. What are the challenges of the reconstruction and the European integration of Ukraine? What does it require from the EU? What lessons could be taken from the strengths and weaknesses of the Eastern Enlargement of the EU, or from the previous attempts at integration in the Western Balkans and in the pre-war EU policies of integrating Ukraine?

Laszlo Bruszt is Co-Director of the CEU Democracy Institute, and Professor of Sociology at the CEU Department of Political Science. During the regime change in 1989 he served as National Secretary of the newly formed independent trade unions and has represented them in the Roundtable Negotiations. He started to teach at CEU in 1992 and has served as its Acting Rector and President in 1996/97. Between 2004 and 2016 he was teaching at the European University Institute in Florence, Italy. His publications focus on issues of regime change and economic transformation. His more recent studies deal with the politics of economic integration of the Eastern and Southern peripheries of Europe.

Andrius Kubilius is a Member of the European Parliament (European People’s Party), and former Prime Minister of Lithuania. He started his political career as a member of the pro-independence Sajudis movement, which favored separation from the Soviet Union. Soon after the re-establishment of Lithuania’s independence, he was elected to the Seimas (parliament). He served as Prime Minister from 1999 to 2000 and again from 2008 to 2012, when he became the first Prime Minister of the country who served the whole term in office. In the European Parliament he serves on the Committee on Foreign Affairs and the Committee on Industry, Research and Energy. In this capacity, he is the parliament's rapporteur on relations with Russia.

Tymofiy Mylovanov is President of the Kyiv School of Economics. During his professional career, he has been teaching for a long time at the European and American universities, including Rheinische Friedrich–Wilhelms–Universität Bonn, University of Pennsylvania and University of Pittsburgh. His research interests cover theory of games and contracts, institutional design. His articles on these topics have been published in leading international academic magazines, including Econometrica, American Economic Review, the Review of Economic Studies. Between 2016 and 2019 he was Deputy Chairman of the Board of the National Bank of Ukraine. In 2019-20 he served as Minister of Economic Development, Trade and Agriculture.

Milada Vachudova is Professor of Political Science at the University of North Carolina at Chapel Hill. Previously she served as the Chair of the Curriculum in Global Studies at UNC from 2014 to 2019. She specializes in European politics, political change in post-communist Europe, the European Union and the impact of international actors on domestic politics. Her recent articles explore the trajectories of European states amidst strengthening ethnopopulism and democratic backsliding – and how these changes are impacting party systems and the European Union. Her book, Europe Undivided: Democracy, Leverage and Integration After Communism (Oxford University Press) was awarded the Stein Rokkan Prize for Comparative Social Science Research.

Iskra Kirova is a senior policy analyst on EU external relations at the Open Society European Policy Institute. She is responsible for EU policy advocacy and analysis on Eurasia and the EU’s Neighborhood Policy and Eastern Partnership. She also works to develop an enabling environment for civil society, and on the emerging challenges of disinformation and public opinion manipulation. Prior to joining Open Society, she worked for the International Crisis Group as an EU advocacy and research analyst. She also served as a research associate and later as a fellow at the USC Center on Public Diplomacy in Los Angeles, and also worked for the European Commission’s Directorate-General for External Relations and for the NATO Parliamentary Assembly.