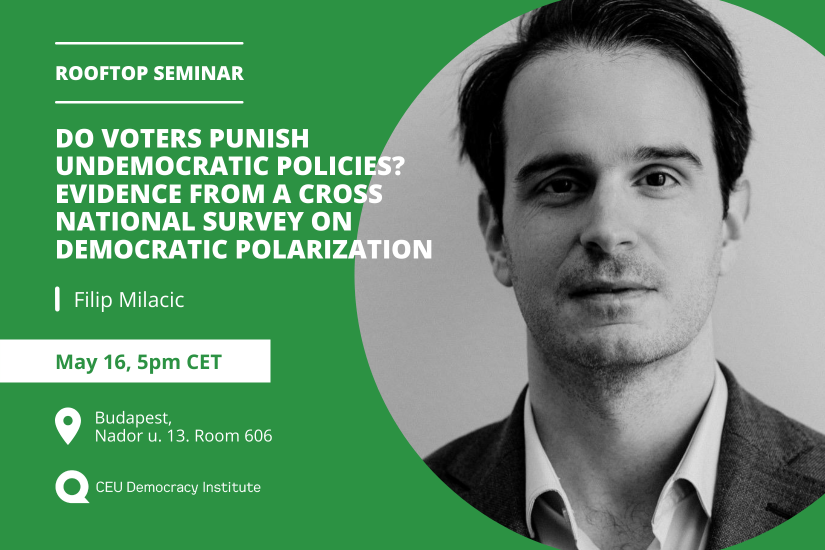 For the survival of democracy it is essential that citizens act as control mechanisms and react to authoritarian tendencies of elected politicians by voting them out of office. Against this backdrop, a survey in seven European countries (Sweden, Germany, Spain, Serbia, Poland, Estonia and Ukraine) has collected data and found out more through its experimental setup: Do the voters value and cherish democracy enough to punish politicians who violate democratic rules of the game? Which elements of a liberal democracy the voters cherish the least/the most? Are the voters willing to punish undemocratic politicians even when it requires voting against their own political interests or party loyalties? For which interests would voters sacrifice democracy? Do the voters tolerate undemocratic behavior in polarized societies more or is this a ‘normal behavior’ that is not to be explained by the degree of polarization? Who are the voters who punish undemocratic behavior?

The paper is available at request from the authors, Filip Milacic, Milan Svolik, Johanna Lutz, and Elena Avramovska.

Filip Milacic has studied political sciences and history of Eastern Europe at the University of Heidelberg and obtained the PhD at the Humboldt University. Currently, he is a senior researcher for democracy and society at the Friedrich Ebert Foundation's (FES) Office 'Democracy of the Future,' and Research Affiliate at the CEU Democracy Institute. Before joining the FES he worked for the Organization for the Security and Co-operation in Europe (OSCE) and at the University of Montenegro. He was also a visiting fellow at the Institute for Human Sciences in Vienna and at the Center for Advanced Studies of the University of Rijeka. He is author of the book Nationalstaatsbildung, Krieg und Konsolidierung der Demokratie. Kroatien, Serbien, und Montenegro (Springer, 2017). His new book Stateness and Democratic Consolidation: Lessons from Former Yugoslavia will be published in 2022 by Springer. His work was published in many academic journals such as Ethnopolitics, Nationalities Papers, Democratization, and Southeast European and Black Sea Studies.

Gabor Simonovits is Assistant Professor at the CEU Department of Political Science. He received his PhD in Politics from New York University in 2018 and he is an alumnus of CEU where he obtained a MA degree in Economics in 2011. His research focuses on both substantive and methodological issues pertaining to the study of public opinion including the study of attitudes towards public policies in the U.S. and inter-group prejudice in Hungary. He has also done work in the field of quantitative methods with a focus on how researcher incentives can lead to the underrepresentation of null findings in published experimental studies. His work has been published or are forthcoming in leading journals including Science, the American Political Science Review, the American Journal of Political Science and the Journal of Politics.