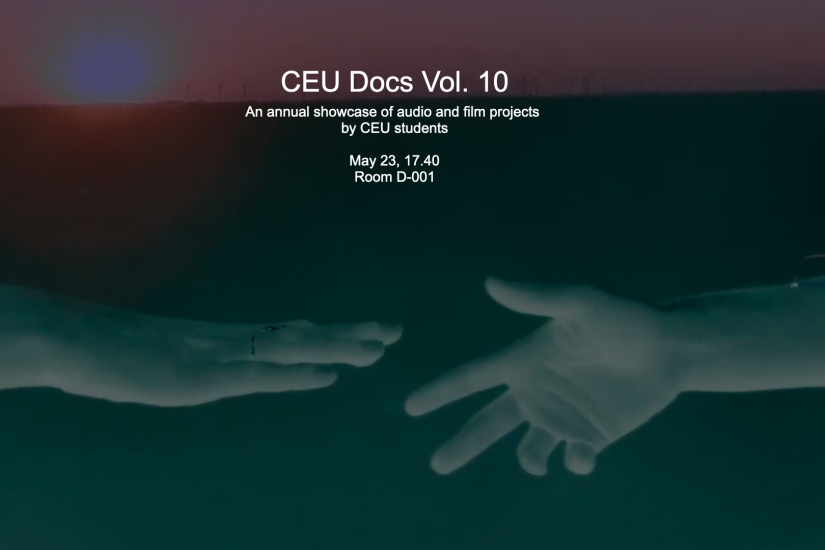 The Visual Studies Platform and CEU Library present a selection of short film and audio projects by CEU students in the Visual Theory and Practice Certificate program (VTP), which are facilitated by the resources and support of the CEU Library’s Media Hub. Courses offered through the VTP, which students pursue in addition to their primary degree program, allow CEU students studying in the social sciences and humanities to engage with their research interests and the knowledge of their disciplines through audio/visual media. The students who made these projects are from a number of different departments, and none are studying filmmaking as their primary degree. They come from all over the world, and as they turn their lenses on the Austrian context, they present a unique perspective on local issues. We will screen work from the courses Fundamentals of Documentary Filmmaking (both BA and MA), Documentary for Social Change, Sound and Vision, and Audio Production. The pandemic continued to pose a special challenge this year, but in spite of that, the students were able to again produce an exceptional body of work.

The screening will take place at CEU's Quellenstraße campus, in the D-001 Tiered classroom, and it is open to the public. It will be followed by a Q&A with the filmmakers, and then a reception to celebrate their work.

In this video we have tried to encapsulate the feeling of vertigo; the sensation when you or the environment around you is in motion. Beyond the literal sense of Vertigo however, this video is exploring a deeper feeling of being suspended in time and place; of being uprooted in life, being in a new environment and the subsequent struggle of finding your footing in an unfamiliar place.

This short film is about the absurdity of a big street building project in times of climate crisis, the mistrust in politicians and about a story of success for environmental activists.

Perpetum Mobile is a short movie about objects that are being passed from hand to hand. They are constantly moving. The main story we tell is that of a little ashtray that we got through the site Willhaben. It has been with us ever since, and we found surprising new ways to make use of it. It inspired us to think of the possibility of giving new lives to the objects we possess.

What was left to the silence
Audio Production (MA)
By Emma Barsegova
Runtime: 8:50

A short, narrative audio essay on voice anthropology and its scattered positioning between language and aesthetics.

Throughout this audio project, I am trying to connect with myself and other things around me, especially after the military coup in Egypt in 2013. I was in trauma after I witnessed people close to me killed in demonstrations. I felt that there was no life anymore. I spent days in my room, avoiding talking with anyone until I decided to move on and do things to help me engage with life again. I went for a walk every day to watch people on the street and record voices. This record was my way of healing myself and getting out of my nightmares.

This short documentary film is about OLIve - the Open Learning Initiative at Central European University which focuses on opening access to higher education for refugees and asylum seekers. The documentary focuses on the philosophy of OLIve and the impact it has had on the lives of students, faculty and the university itself.

When My Family Left the Bad Church
Documentary for Social Change (MA)
By Hannah Garrett
Runtime: 5:30

When my Family Left the Bad Church is a documentary short film that brings attention to the unique challenges of leaving cultic or high-control groups through one family's story. The film traces the basic arc of my family's experience through interviews and archival footage. It examines the different types of trauma people go through in these environments and individual approaches to dealing with it. As narrator, my role is that of both insider and outsider. I don't remember life in the cult, but I've grown up immersed in its legacy.

The social conditions of food production are an aspect excluded from discussions about bio, regional and sustainable food in Austria. In particular, the glasshouse area of Southern Simmering is somewhat of a blind spot for many people living in the capital. On the audio-narrative level, we represent the different experiences of laboring and living around the glasshouses via a multivocal approach. On the visual level, we aim to convey the qualities of the space by paying close attention to the details, beauties, and hardships of the area.

As the looming threat of the climate crisis is becoming more and more visible, the ones who are most vehemently fighting against it are currently young people. On the background of the protest movement against the Lobau highway in Vienna, this film introduces three young Fridays for Future Vienna activists and gives a voice to their experience between setbacks and success.

Carmen Cirnfus (she/they) reflects on their upbringing as an Afro-Austrian in the village of Alt-Nagelberg, Austria, including on how being the only person of color in their village impacted their childhood and adulthood, and intertwines those experiences to reflect on the impact of the Black Lives Matter Movement in the Austrian context.