Populist Geopolitics: The Russian Invasion of Ukraine and the Orban Regime 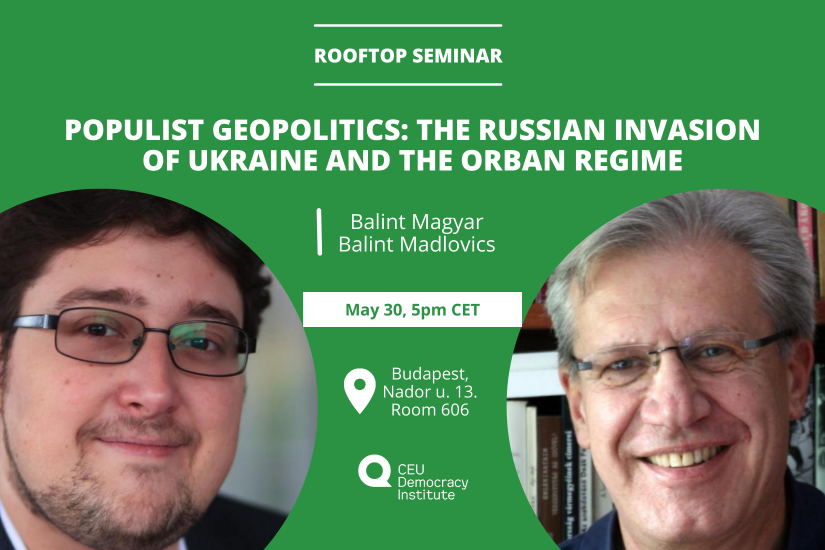 The reaction of the Orban regime to the Russian invasion of Ukraine cannot be understood without a broader analysis of the regime’s geopolitical context. In this paper, we propose the concept of populist geopolitics, and argue that populist narratives are developed in adjustment to pragmatic geopolitical motivations defined by the regime’s internal character and external constraints. After defining populism as an ideological instrument of morally unconstrained collective egoism, we show how the basic character of the Orban regime can explain the development of its geopolitical relations, and how it used populism as a framework to compose a two-faced, symmetrical narrative for the EU and Eastern autocrats before 2022. Analyzing Orban’s response to the invasion of Ukraine, we argue that his dependency on Putin’s Russia was a key defining factor in formulating his response, and such geopolitical motivations led him to make a remarkable turn: changing the initial pro-Ukraine sentiments of the Hungarian people, and going against the Western world in a carefully developed, anti-Ukrainian and pro-Russian populist narrative.

Balint Magyar is a Senior Research Fellow at the CEU Democracy Institute. Having obtained his University Doctoral degree in Political Economy and MA in History and Sociology at the Eotvs Loránd University, Budapest, he started his career as a researcher (1977-1990) at different research institutes. Between 1979 and 1990 he was a human right activist of the anti-communist opposition movement. Since its foundation in 1988 until 2009 he was one of the leaders of the Hungarian Liberal Party (Alliance of Free Democrats). He was a member of the Hungarian Parliament (1990-2010), and served twice as Minister of Education (1996-1998; 2002-2006). He was a member of the Governing Board of the European Institute of Innovation and Technology (EIT) (2008-2012). Between 2010 and 2020 he was a senior researcher of the Financial Research Institute at Budapest. He has also been engaged by UNICEF, Open Society Foundation and European Roma Right Center in different missions as a consultant to enhance education reforms, and he took part in different missions as an NDI (US) expert in supporting democratic transition and election observer in Libya and Tunisia. Since 2013, he has edited and published several books on post-communist regimes. His book on the Hungarian Mafia State was published – beyond Hungarian – in English, Russian, Bulgarian and Polish. His latest (co-authored) book The Anatomy of Post-Communist Regimes was published by the CEU Press in October of 2020.

Balint Madlovics is a political scientist, economist, and sociologist. He is the co-author of The Anatomy of Post-Communist Regimes (Budapest-New York: CEU Press, 2020), a comprehensive work on post-communist regimes. He has published articles in peer-reviewed journals like Public Choice since 2019, and contributed chapters to various reports and volumes of studies since 2015. In 2016-2018, he wrote weekly political analyses for the liberal think tank Republikon Institute, publishing on the website of Magyar Narancs, a Hungarian weekly. He has written or co-authored commentaries for online media like Project Syndicate (in English), and printed media like Elet és Irodalom (in Hungarian language). He holds an MA in Political Science from Central European University (CEU, 2018), a BA in Applied Economics from Corvinus University of Budapest (BCE, 2016), and a BA in Sociology from Eotvos Lorand University (ELTE, 2021). He was a Research fellow of Financial Research Institute in Budapest (2018-2019). Currently, he is a Research Assistant at CEU Democracy Institute.

Erin Jenne is a Research Affiliate at the CEU Democracy Institute, and a Professor at the International Relations Department at CEU. She received her PhD at Stanford University in political science with concentrations in comparative politics, international relations and organizational theory. She has received numerous grants and fellowships, including a MacArthur fellowship at Stanford University, a Belfer Center for Science and International Affairs (BCSIA) fellowship at Harvard University, a Carnegie Corporation scholarship, a Senior Fernand Braudel fellowship at European University Institute (EUI) in Florence, and was co-principal investigator for a Minerva Grant from the US Office of Naval Research to conduct research on the subject of soft power. She is the author of Ethnic Bargaining: The Paradox of Minority Empowerment and Nested Security: Lessons in Conflict Management from the League of Nations and the European Union. She has published numerous book chapters and articles, and was an Associate Editor for the Journal of Foreign Policy Analysis.