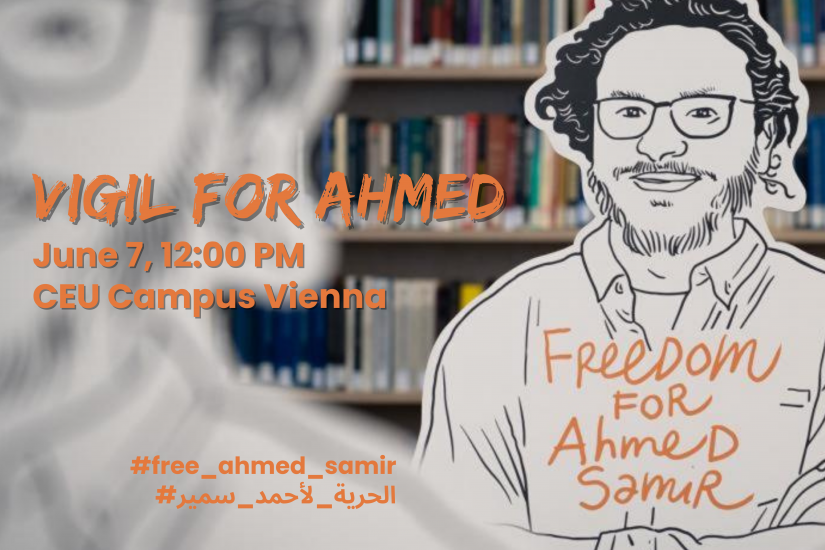 The retrial of our student Ahmed Samir Santawy – currently unjustly imprisoned in Egypt on false charges for over a year – is scheduled for June 6 in Cairo. In a show of solidarity, a vigil will be held on Tuesday, June 7 starting at 12 pm in front of our campus in Vienna.

We call on the Egyptian authorities to release Ahmed Samir Santawy immediately and allow him to resume his studies in Vienna. We also call upon our partner universities and institutions, Austrian Student Union, and all those committed to academic freedom everywhere to join us in delivering a strong message of support for Ahmed's rapid release.

There is only one fair verdict – the immediate and unconditional release of Ahmed!

Join us in standing in solidarity for Ahmed!

Please note that during the event photography and video recording will occur for media purposes. If you are uncomfortable with being photographed, please inform the organizers of the event.

CEU MA student Ahmed Samir Santawy was arrested in Cairo on February 1, 2021 and was charged with belonging to a terrorist organization and spreading false news on social media. Ahmed has been detained under obscure charges, without evidence, in harsh and inhumane conditions. CEU has been working with Austrian and American authorities, the European Union and UN human rights bodies to secure Ahmed’s release. Requests for his release have been presented to Egyptian officials in Cairo and to Egyptian embassies in Vienna, Brussels and Washington. CEU remains grateful to all of the authorities who have assisted us in making the case for Ahmed’s immediate release and we appreciate the support Ahmed has received from Austrian universities and student associations.

Ahmed is not an isolated case. Patrick Zaki, an Egyptian student at the University of Bologna, was imprisoned in February 2020. Following a huge international campaign, Zaki was released in December 2021. The charges against him have not been dropped, and his next court date is scheduled for June 21. Walid Salem, a doctoral researcher at the University of Washington, was arrested in March 2018. He was released later that year, but his passport seized, and he is unable to return to his studies. These are but a few of the many researchers targeted in Egypt’s campaign against academic freedom.