New Paths to Address the Imminent Crisis of Survey Research: A Hybrid Solution 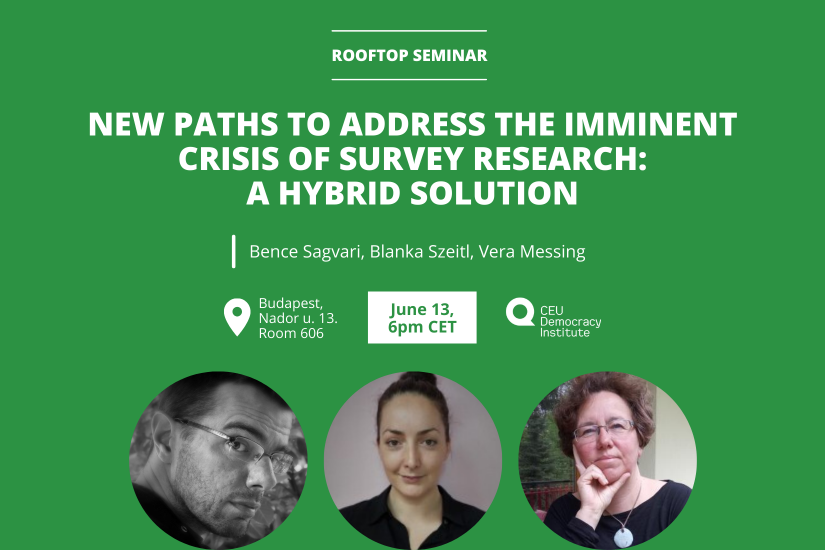 The article presents the results of a pilot push-to-web (PtW) survey conducted in the framework of the European Social Survey (ESS) methodological experiment and was conducted in December 2020 in Hungary, Austria and Serbia. The basic question of the research is whether a self-completion survey on an identical stratified random sample, combining online and offline questionnaire forms, can replace a face-to-face survey and if so, how much does the mode of the survey influence responses. The relevance of this experiment lies in the strategic plans of the ESS to change its data collection mode from classical face-to-face to self-completion hybrid data collection by R13 in all countries[1]. The authors present their experience in implementing the experimental hybrid survey by focusing on whether it can be used to replace face-to face surveys while identifying biases inherent to such an approach. The authors give a detailed account of the research's effectiveness in terms of nonresponse rates, response rates and the composition of the sample, and compare these with relevant data from the ESS Hungarian data in round 9 (2019) and the 2016 microcensus. The main finding of the experiment is that the PtW hybrid survey results in a similar response rate (around 40%) to the face-to-face survey, but that the sample composition is different from the ESS R9: it reinforces some problematic dimensions (more skewed towards urban population and educated groups), while improving some 'gaps' (e.g., age group equalisation). Another important finding concerns the differences in responses compared to interviewer administered surveys: people tend to answer sensitive questions differently when they are on their own compared to when an interviewer asks the questions. However the four types of biases: mode effect, the effect of time, the effect of COVID and the effect of the sample composition could not be disentangled completely in this research design. Our conclusion is that after proper preparation and weighting, PtW hybrid survey using a random sample is a valid method, however responses are expected to be different – not worse or better, but different -from traditional face to face data collection.

Vera Messing is a research fellow at the CEU Democracy Institute as well as a senior research associate of the Institute of Sociology at the Hungarian Academy of Sciences since 2004. She has over 15 years’ of experience in empirical research on ethnicity, minorities, migration, social exclusion, media representation of vulnerable groups and ethnic conflicts. Her work focuses on comparative understanding of different forms and intersections of social inequalities and ethnicity and their consequences. She is specifically interested in policy and civil responses to ethnic diversity in the field of education and labor market. The main focus of her research has been employment and education of minorities in Europe, migration and migrant inclusion. She has published in academic journals such as Identities: Global Studies in Culture and Power; Ethnicities; Ethnic and Racial Studies; European Education, Intercultural Education. She recurrently consults domestic civil and governmental institutions on issues of employment and education of vulnerable groups.

Bence Ságvári received his Ph.D in sociology at ELTE University in 2011. He is a Senior Research Fellow at the Centre for Social Sciences and act as head of CSS-Recens Computational Social Scienc Research Department. From 2021 he is also an associate professor at Corvinus University of Budapest. From 2011, he works as the Hungarian national coordinator for the European Social Survey (ESS), one of the largest cross-national comparative social surveys in the world. In 2014/15, he was Visiting Fulbright Professor at Indiana University, Bloomington (USA). He has been represented as the Hungarian partner in several cross-national comparative survey projects, such as EU Kids Online (EUKO) or World Internet Project (WIP).

Blanka Szeitl graduated from ELTE Faculty of Social Sciences with an MSc degree in survey statistics in 2015. Between 2013 and 2020, she worked as a survey methodologist at TARKI Social Research Institute, where she gained concrete experiences in designing and conducting large-scale survey researches. In 2017 she started her PhD in applied mathematics at the University of Szeged. Her research topic is the mathematical background of survey sampling and new quantitative research techniques. She is also working on the analysis of survey biases that may arise from non-response. She is currently teaching assistant at the Department of Statistics at ELTE, where she also leads a TinLab project on "Public Opinion Research Methods in New Technological and Social Environments", which specifically aims to study and improve data collection techniques in Hungary. She joined the Institute of Sociology at Centre for Social Sciences in 2021, where she works on survey methodology analyses related to the European Social Survey (ESS) and participates in the design of new methodological researches.

Levente Littvay is Research Affiliate at the CEU Democracy Institute and  Professor of Political Science at CEU where he teaches grad courses in research design, applied statistics, electoral politics, voting behavior, political psychology, American politics and is the recipient of CEU's Distinguished Teaching Award (2015) for methods teaching and CEU Teaching Excellence Award (2021) for online education. In 2019-2020 he was European University Institute’s Fernand Braudel Senior Research Fellow. He consults regularly, taught numerous research methods workshops and was one of the Academic Convenors of the European Consortium for Political Research Methods Schools (2015-2021), is the founder of MethodsNET, Specialty Chief Editor of the Methods and Measurement section of Frontiers in Political Science, head of Team Survey in Team Populism where he helped spawn the New Populism series with The Guardian and member of the European Social Survey’s Round 10 (2020-21) democracy and Covid-19 module questionnaire design teams.