Ukraine. After the Invasion. 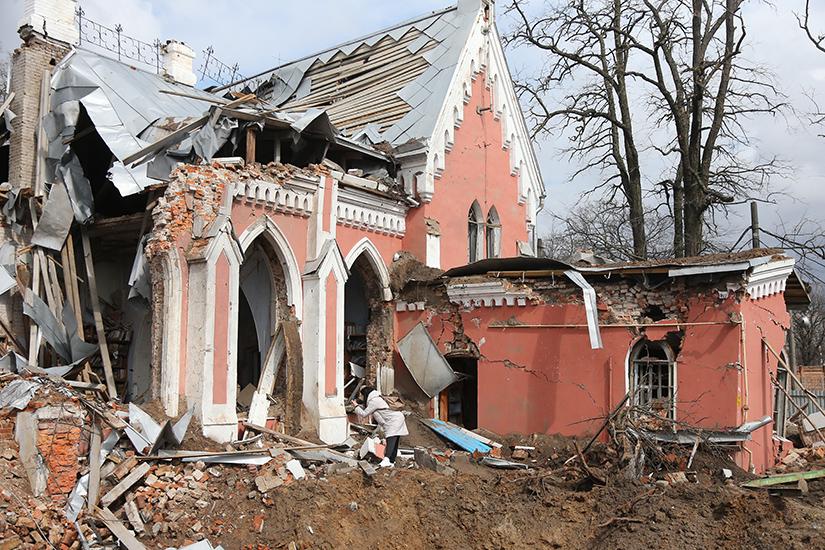 Central European University and the Media Initiative for Human Rights (MIHR), present a three-day photo exhibition “Ukraine. After the Invasion” to mark the awarding of the prestigious CEU Open Society Prize to the Ukraine 5 AM Coalition.

MIHR is a Ukrainian NGO launched in September 2016 by journalists to combine journalism and human rights activities to respond to human rights violations arising from Russia’s aggression against Ukraine.

The exhibition, which sheds light on Russia's war crimes in Ukraine, features 25 works by ten Ukrainian photographers and well-known reporters for global news agencies, as well as photos taken by people in Kyiv, Kharkiv, Chernihiv, Odesa, Donetsk and Zhytomyr regions. The photos document destruction dotting the map of Ukraine – locations which the Russian army has been shelling since the beginning of the full-scale invasion launched on February 24, 2022.

Following the opening event, the exhibition will be visible from the street level through CEU’s front windows. When the exhibition closes at CEU on Monday, June 27, it will travel on to The Hague.

Traveling with MIHR from Ukraine are two victims who will share their personal stories as part of the opening of the exhibition. We are touched and honored to hear the testimonies of Alyona Lapchuk, the wife of Vitalii Lapchuk, a former member of the Ukrainian military, who was abducted in his occupied home city of Kherson in early March by the Russian military, his dead body found in a river with signs of torture on June, 9, 2022; and Olena Shevchenko, whose sister Lyudmila Shevchenko is missing. Wounded during the shelling of Hostomel near Kyiv, Lyudmila went to the hospital with her husband Igor and has been missing since. It is now known that Igor is held in one of Russia's pre-trial detention centers in Bryansk region. Ludmila's whereabouts remain unknown.

“The world is gradually getting used to the war in Ukraine, the terrible crimes committed by the Russian army against Ukrainians are becoming a regular news feed in the world media. The purpose of this exhibition is to shine light on the civilians whose lives have been devastated, the cities that have been destroyed, the culture that has been ravaged by the aggression behind every "a war crime was committed" phrase. The Media Initiative for Human Rights and the Ukraine 5 AM Coalition’s documentary specialists, journalists and lawyers deal with all this on a daily basis,” says MIHR coordinator Olha Reshetylova.

The exhibition was prepared with the support of the European Union and the International Renaissance Foundation under the grant component of the EU4USociety project. The material reflects the position of the authors and does not necessarily reflect the position of the International Renaissance Foundation and the European Union.