The Electoral Effectiveness of Targeted Government Subsidies in Hungary 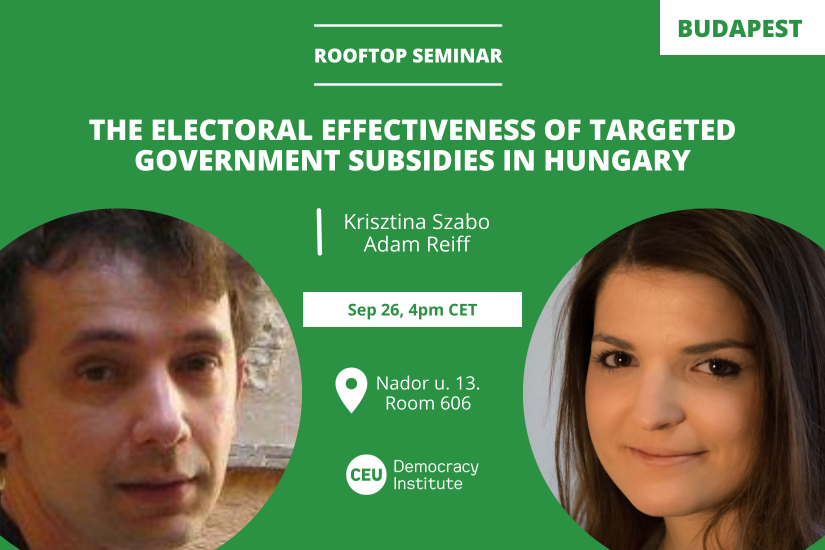 The paper examines the effect of two subsidy programs targeting rural areas on electoral support for Hungary’s right-wing ruling party (Fidesz). The first program, the Rural Family Housing Allowance Program (programmatic distributive strategy), was given directly to individuals living in eligible small settlements. The second program, the Hungarian Village Program (pork-barrel politics), provided an indirect support to individuals by proffering public resources to the local governments in eligible small settlements. The program were introduced in July 2019, shortly after the EP elections in May 2019 and just before the local elections in October 2019. We rely on a difference in differences estimation strategy by comparing average changes in Fidesz vote share from before the introduction of the policies to after it between eligible and non-eligible settlements. We find that Fidesz vote share increases by 4.3 percentage points in settlements that were eligible for both programs relative to non-eligible settlements. Additionally, we measure the effect of the amount of subsidies on Fidesz vote share and find that an additional HUF 10,000 (approximately 30 USD) HVP subsidy increases Fidesz vote share by around 1.2 percentage points (relative to Fidesz vote share in those settlements that did not receive this additional subsidy). In contrast, the amount of Rural CSOK subsidy does not have a significant effect on Fidesz vote share. We suggest that Fidesz targeted its core supporters with these policies and mobilized core voters (rather than pursued swing voters).

Krisztina Szabo is PhD Candidate at Central European University within the Political Economy track and a research fellow at Corvinus University of Budapest. Previously, she was a visiting PhD student at Cornell University and did her Master's degree at University of Glasgow. She studies the interaction of political and economic systems, mostly in developing country. Recently, she has been particularly focused on studying Hungarian politics and on voters' behavior in Hungary. Her recent papers appeared in the Journal of Development Studies and in Political Studies Review.

Adam Reiff earned a PhD degree in Economics at CEU in 2006. He was a researcher at the Central Bank of Hungary between 2006-2021, and has been a Visiting Lecturer at the Department of Economics and Business at CEU since 2006. This year he served as a short-term visitor at the CEU Democracy Institute. In November, he will join the Centre of Economic and Regional Studies of the Hungarian Academy of Sciences. His research interests are monetary macroeconomics and transmission of cost shocks into prices, sustainability and working of pension systems, and most recently the political economy of subsidies, voting behaviour and Hungarian politics.

Gabor Toka is a Senior Research Fellow in the Vera and Donald Blinken Open Society Archives at the Central European University, Budapest, Hungary, where he is the curator of a thematic collection of surveys of social and political attitudes. He specializes in the comparative study of voting behavior, political attitude formation, and political communication and is particularly interested in how the democratic process and mass media can assist citizens in producing election outcomes that faithfully reflect their underlying preferences.