Italy after the Elections - Implications for National and European Politics 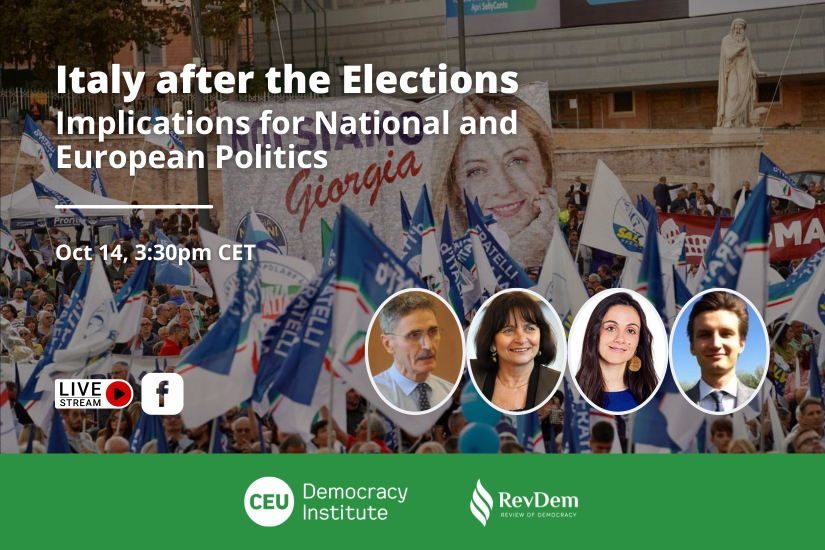 On September 25, 2022, Italians elected a right-wing coalition led by Giorgia Meloni to form a new government. The victory of her post-fascist party has aroused great interest throughout Europe, as it could potentially affect the fate of liberal democracies on the continent. The panel will discuss the possible policies of the new government, especially in the areas of human rights and the rule of law, the consequences of the populists' success, and the implications of these elections for European politics.

Sergio Fabbrini is Dean of the Political Science Department, Director of the Master in International Public Affairs and Professor of Political Science and International Relations at LUISS Guido Carli. He co-founded and then directed the School of International Studies at the University of Trento from 2006 to 2009. Since 1996, he is Recurrent Professor of Comparative Politics at the Department of Political Science and Institute of Governmental Studies, University of California at Berkeley. Previously he was editor of "Rivista Italiana di Scienza Politica." He was the first Italian scholar awarded the Amalfi European Prize for the Social Sciences, then he won the Filippo Burzio Prize for the Political Sciences, and the Capalbio Prize for Europe. He lectured and taught in many countries of Europe, North and South America and Asia and is a referee for several international academic journals.

Nadia Urbinati is Kyriakos Tsakopoulos Professor of Political Theory at Columbia University. She co-chaired the Columbia University Faculty Seminar on Political and Social Thought and was a co-editor of the academic journal Constellations: An International Journal of Critical and Democratic Theory. She is a member of the Executive Committee of the Foundation Reset Dialogues on Civilization and the Feltrinelli Foundation (Milan). She is permanent visiting professor at the Scuola Superiore de Studi Universitari e Perfezionamento Sant'Anna of Pisa (Italy), and taught at Bocconi University (Milan), SciencesPo (Paris) and the University UNICAMP (Brazil). In 2008 the President of the Italian Republic awarded her the Commendatore della Repubblica (Commander of the Italian Republic).

Michal Matlak is managing editor of the Review of Democracy. He holds a PhD from the European University Institute, and was a visiting scholar at Princeton University, the Hertie School of Governance in Berlin, KU Leuven and the Institute for Human Sciences in Vienna. His research focuses on the forms of secularism in the European integration process, the institutional design of the European Union, and various aspects of Europeanization. He also works in the European Parliament as a policy advisor.