Democratic Support and Social Solidarity in Times of Covid 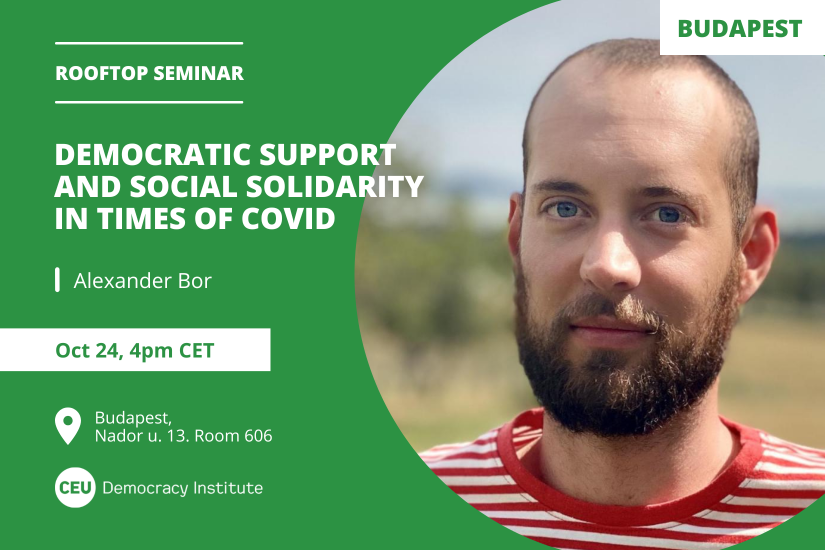 While the world has been busy mitigating the disastrous health and economic effects of the novel coronavirus, a less direct, but not less concerning peril has largely remained unexplored: the Covid-19 crisis may disrupt some of the most fundamental social and political relationships in democratic societies. The authors interviewed samples resembling the national population of Denmark, Hungary, Italy and the US three times: in April, June and December of 2020 (14K observations). They employed a broad set of survey questions tapping into perceptions about the two major relationships structuring society: Horizontal relationships between citizens, and vertical relationships between citizens and the state. They benchmarked these data against pre-Covid levels measured in the World Values Survey and the European Values Survey. They present strikingly similar findings across the four diverse countries, and show that support for the political system has markedly decreased already by April and fell further till December. Exploiting the panel setup, they demonstrate that within-respondent increases in indicators of pandemic fatigue (specifically, the perceived subjective burden of the pandemic and feelings of anomie) correspond to decreases in system support and increases in extreme anti-systemic attitudes. Meanwhile, they find much smaller changes in social solidarity and trust compared to pre-pandemic levels, and find that these attitudes are largely unaffected by pandemic burden. The results imply that the pandemic is not only a health-crisis, but poses a substantial challenge to the relationship between citizens and the state.

Alexander Bor is a Post-doctoral Research Fellow at the CEU Democracy Institute’s De- and Re-Democratization Workgroup, and a Visiting Professor at CEU Vienna. He received an MA in Political Science at CEU in 2012, and a PhD in Political Science at Aarhus University in 2018, where he also worked as a postdoc until 2022. His research focuses on how the human mind navigates social and political challenges like political polarization, online political hostility, the Covid-19 pandemic, or selecting and evaluating political leaders. His work integrates insights from political behavior, social and evolutionary psychology, and public health. He employs diverse quantitative analytical tools like surveys, experiments and machine learning.

Peter Kreko is Executive Director of the Political Capital Institute, senior fellow at the Washington-based CEPA think tank and PopBack Fellow at the University of Cambridge. Earlier, he was guest researcher at the Europe’s Futures - Ideas for Action program of the Vienna-based Institute for Human Sciences (IWM), and non-resident Associate Fellow at the Johns Hopkins University SAIS Bologna Institute of Policy Research. He is associate professor with habilitation at the Department of Social Psychology at Eotvos Lorand University, Budapest. His main areas of expertise are disinformation, Russian political influence in the West, and European populism and radicalism.

Levente Littvay is Research Affiliate at CEU Democracy Institute and Professor of Political Science at CEU. He researches survey and quantitative methodology, and the psychology of radicalism and populism. He is an award-winning teacher of graduate courses in research design, applied statistics, comparative, American and electoral politics, political psychology and behavior. He was academic convenor of the European Consortium for Political Research Methods Schools and now runs MethodsNET.org. He heads Team Survey in Team Populism, is a member of the European Social Survey Round 10 democracy and Covid-19 module questionnaire design teams and co-PI for Hungary and Tunisia at Comparative Study of Election Systems.