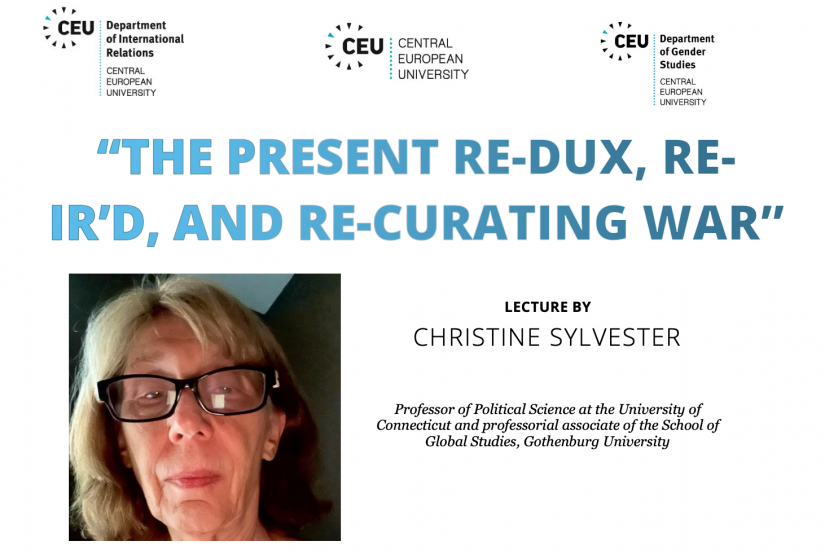 Keynote address: Christine Sylvester, Professor of Political Science at the University of Connecticut and a professorial associate of the School of Global Studies, Gothenburg University

If we think of curation as collecting, conserving, and displaying tokens of social meaning, we might ask International Relations (IR) what its war curations consist of now and might speculatively be in the years ahead. Yet this talk avoids direct references to IR. It collects and displays war curations - one might think of them as memorials or future-oriented warnings  - that lie outside the usual purview of that field’s theories. Drawing on her seminal work in feminist IR theory and recent research on memoralizing war women in the USA, Vietnam, and the UK, in this talk, Christine Sylvester suggests a narrative, experimental approach to studying the (re-)curating of war. It moves ahead and back in time and place, circling IR war concerns obliquely as it travels between Ukraine, Northern Ireland, and Hiroshima, among other spaces and sites.

Christine Sylvester PhD is Professor of Political Science at the University of Connecticut and a Professorial Affiliate of the School of Global Studies Gothenburg University. She has written seven books and been editor of numerous edited volumes as well as having an extensive archive of journal articles on feminist IR; critical development studies; art, museums and international relations; and critical war studies. Her latest research centers on the politics of memorializing international war and features in "Curating and Re-Curating the American Wars in Vietnam and Iraq" (Oxford University Press, 2019). She has held the Swedish Research Council’s Kerstin Hesselgren Professorship, was awarded an honorary doctorate in social studies from Lund University, and has been a faculty fellow at the University of Connecticut's Humanities Institute. She is currently editor of the Routledge book series War, Politics, Experience and is working on a co-authored book with two American combat veterans of Afghanistan and Iraq, tentatively titled "War in Three Voices".