De-Democratization and Gender in Eastern Europe 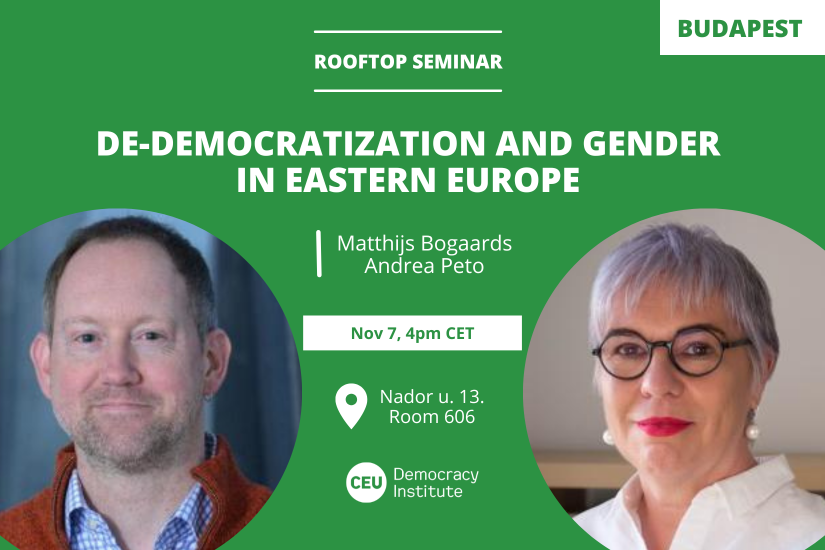 Many observers have written with concern about a growing “opposition to gender equality,” “anti‐gender campaigns,” and even a “war on gender.” Often, these trends take place in countries that are witnessing a decline in democratic quality, a process captured by such labels as “democratic erosion,” “democratic backsliding,” or “autocratization.” The thematic issue presented at the seminar brings together literature on gender equality and de‐democratization with an emphasis on the role of illiberalism and a regional focus on post‐communist Europe.

Matthijs Bogaards is a Research Affiliate at CEU Democracy Institute, and Associate Professor at the CEU Department of Political Science. He joined from Jacobs University Bremen, where he was full professor of Political Science. A graduate from Leiden University, the Netherlands, and the European University Institute in Florence, Italy, Matthijs has studied and worked internationally for the past twenty-five years. He has published widely on political parties and electoral systems in comparative perspective, on measuring democracy, and on the challenge of democracy in divided societies. His current research focuses on terrorism, de-democratization, and consociational forms of power sharing.

Andrea Peto is a historian, a Research Affiliate at the CEU Democracy Institute, a Professor at the CEU Department of Gender Studies, and a Doctor of Science of the Hungarian Academy of Sciences. Her works on gender, politics, Holocaust, and war have been translated into 23 languages. In 2018 she was awarded the 2018 All European Academies (ALLEA) Madame de Staël Prize for Cultural Values. She is Doctor Honoris Causa of Södertörn University, Stockholm, Sweden. Recent publications include: The Women of the Arrow Cross Party. Invisible Hungarian Perpetrators in the Second World War. Palgrave, Macmillan, 2020. And Forgotten Massacre: Budapest 1944. DeGruyter, 2021. She writes op-ed pieces for many international and national media.

Andrea Krizsan is Senior Research Fellow at the Democracy Institute and Professor at the Department of Public Policy and the Gender Studies Department. She works on the politics of inequalities and equality policy interventions  in countries of Central and Eastern Europe. Her current research focuses on gender equality aspects of de-democratization processes and the role of civil society in building democratic resilience and inclusive democratization processes. Besides her academic work Andrea also acts as the Chair of the CEU Senate Equal Opportunity Committee. Andrea has a PhD in Political Science from the Central European University.

Erin K. Jenne is a Research Affiliate at CEU Democracy Institute and Professor of International Relations at CEU, where she teaches courses on mixed methods ethnic conflict, nationalism and populism and foreign policy analysis. Her first book, Ethnic Bargaining: The Paradox of Minority Empowerment (Cornell University Press, 2007) won Mershon Center’s Edgar S. Furniss Book Award in 2007 for making an exceptional contribution to the study of national and international security. She has published numerous book chapters and articles in International Studies Quarterly, International Affairs, Security Studies, Regional and Federal Studies, Journal of Peace Research, Civil Wars, International Studies Review, Research and Politics, Nationalities Papers and Ethnopolitics. She was an associate editor for the Journal of Foreign Policy Analysis and has served in several capacities on the Emigration, Ethnicity, Nationalism and Migration Section of the International Studies Association and the Comparative Politics Section of the American Political Science Association.