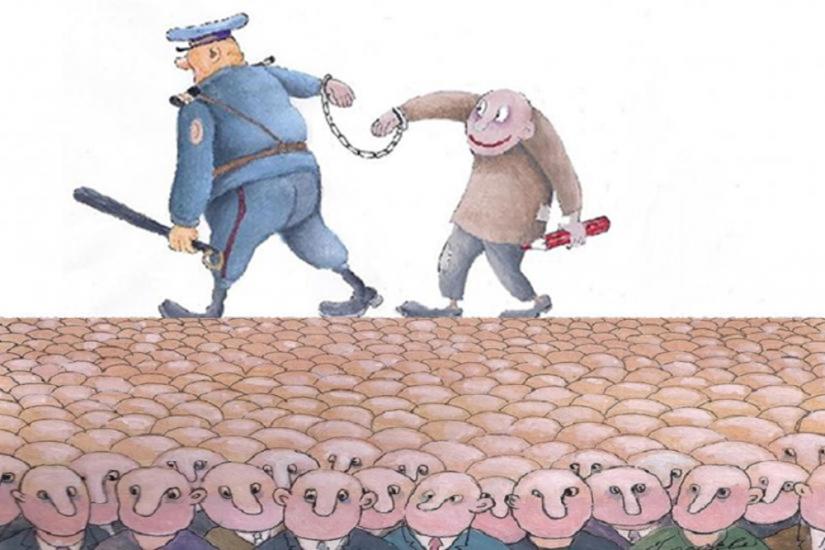 The right to freely express oneself through humor and satire is vital for democratic life; this can also include material that might ‘offend, shock or disturb’ part of the audience (as famously stated by the European Court of Human Rights in Handyside v. United Kingdom, 1976). On the other hand, humor can sometimes be used to disguise or normalize unlawful forms of speech – such as incitement to violence, hatred or discrimination, for example. Defining the boundaries of free speech is particularly difficult in the case of humor, as the same given joke (or cartoon, meme, etc.) can often lend itself to different interpretations by different audiences.

How do courts of law deal with the interpretive challenges posed by humor, especially in cases concerning free speech and its limits? And how can humor research help judges develop a more consistent approach to these challenges? During the seminar, the members of the Constructive Advanced Thinking project ‘Cartoons in Court’ will tackle these questions in light of their ongoing research, including the findings presented in the special issue ‘Humor and the Law: The Difficulty of Judging Jests’ (HUMOR: Journal of Interdisciplinary Humor Research, 35, 3, 2022; ed. by B. Adriaensen, A. Bricker, A. Godioli and T. Laros).

- Alberto Godioli (University of Groningen), ‘Interpreting humor in court: From text to context (and back)’

- Vicky Breemen and Kelly Breemen (Utrecht University), ‘Imagining interdisciplinary dialogue on the concept of parody before the European Court of Justice’

- Tjeerd Royaards (Cartoon Movement), ‘Cartoonists’ perspectives on humor and free speech’. The state of cartooning in Hungary: a conversation with Gábor Pápai.

- Website of ForHum: Forum for Humor and the Law, an interdisciplinary platform founded by A. Godioli (University of Groningen) and L. Little (Temple Law School).

- Website of Cartoon Movement, an online platform bringing together professional editorial cartoonists from all over the world.

Kelly Breemen is Assistant Professor at the Centre for Intellectual Property Law (CIER) of Utrecht University’s Molengraaff Institute for Private Law, specializing in research at the intersection of art, culture, law and technology. She holds a research master (2012, cum laude) and PhD in information law from the University of Amsterdam (2018, Institute for Information Law, IViR). Her dissertation focused on the protection of indigenous peoples’ traditional cultural expressions from a copyright, cultural heritage and human rights law perspective. She is also a researcher at the NIOD Institute for War, Holocaust and Genocide Studies, where she conducts academic research on heritage issues and themes in a broader sense. She is involved in the NWA project Pressing Matter: Ownership, Value and the Question of Colonial Heritage in Museums.

Vicky Breemen is Assistant Professor at Utrecht University’s Centre for Intellectual Property Law (CIER). She holds a research master’s degree (cum laude, 2012) and a doctorate in information law (2018), both from the University of Amsterdam. She wrote her PhD thesis on the future principles of a library privilege in copyright law at the Institute for Information Law (IViR) of the University of Amsterdam. Her dissertation was awarded the Dutch Association of Information Professionals’ annual prize for best publication (Victorine van Schaickprijs KNVI, 2019). A central thread in Vicky’s research is the interplay between law, culture and technology, utilizing both legal and nonlegal concepts and sources. Her interdisciplinary research interests include copyright law; fundamental rights such as freedom of (artistic) expression, and cultural heritage institutions and digitization.

Andrew Bricker is an Assistant Professor of English in the Department of Literary Studies at Ghent University and a Senior Fellow at the Andrew W. Mellon Society of Fellows in Critical Bibliography at the Rare Book School at the University of Virginia. His research focuses on interdisciplinary approaches to satire, the law, laughter and humour. His book Libel and Lampoon: Satire in the Courts, 1670-1792 (Oxford University Press, 2022) studies the intersections of libel law and English satire during the seventeenth and eighteenth centuries.

Alberto Godioli is an Associate Professor in European Culture and Literature at the University of Groningen, and programme director of the Netherlands Research School for Literary Studies (OSL). His research focuses on humor and free speech from an interdisciplinary perspective, combining case law analysis with insights from humanities-based humor studies. He is Principal Investigator of the project ‘Humor in Court’ (funded by the Dutch Research Council, 2022-2027, NWO Vidi grant), and co-founder of ForHum: Forum for Humor and the Law (www.forhum.org). Together with Prof. Laura Little (Temple Law School), he recently organized the symposium ‘Laughing Matters? Humor and Free Speech in the Digital Age’ (Columbia Global Freedom of Expression, 14 October 2022).

Ana Pedrazzini is a researcher in Communication and Semiotic studies at ECyC IPEHCS CONICET – Comahue National University, Argentina. She obtained her PhD in Communication Sciences at CELSA – Paris-Sorbonne University and in Social Sciences at the University of Buenos Aires. She conducts interdisciplinary research projects on humor, cartoons, satirical press and multimodality. One of her current studies focuses on cartoons as a discursive genre, cartoonists’ conceptions of their work, the cartoon genre, and the situation of cartoons and cartoonists around the world. Another line of research highlights the pedagogical value of humor and cartoons and studies how creating cartoons can favor children's and adolescents’ multiliteracies, civic engagement and empathic concern.

Tjeerd Royaards is an award-winning Dutch editorial cartoonist living in Amsterdam. He has worked as a cartoonist since 2005, ever since getting a master’s degree in Political Science at the University of Amsterdam. His work has been published by the New York Times, BBC, CNN, the Guardian, Der Spiegel, Le Monde, Courrier International, France 24, Internazionale, Politico Europe, and many others. Tjeerd is Editor-in-Chief of Cartoon Movement, a global platform for editorial cartoons and comics journalism. He is also on the Board of Advisors of Cartoonists Rights Network International and a member of Cartooning for Peace.

More information on the project is available here.