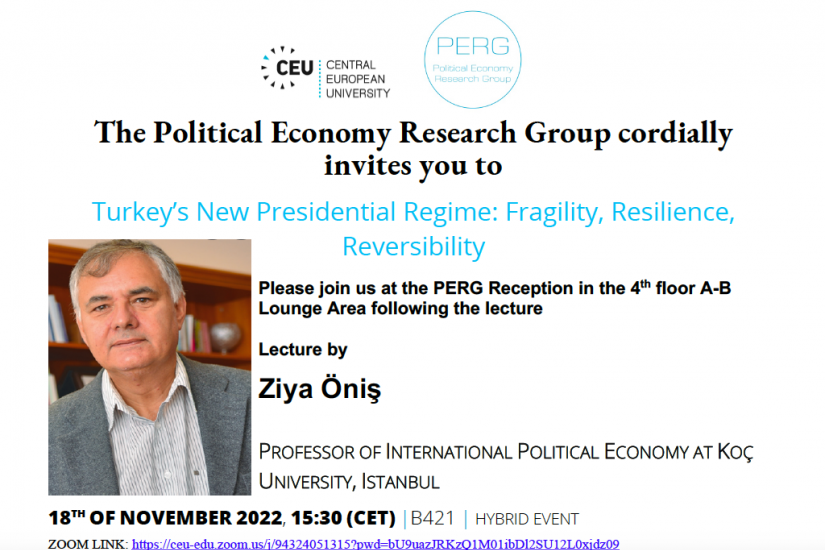 We are delighted to announce that PERG will host Professor Ziya Önis for the next hybrid lecture. Prof. Önis is a worldwide known political economist from Koc University, Istanbul, and has greatly contributed to the areas of Turkish political economy and foreign policy. He will give a PERG lecture based on his most recent article, analysing Turkey's experience with right-wing populism from a comparative perspective, with references to Hungary, Brazil and India's experiences.

ABSTRACT / Turkey’s forthcoming general election of June 2023 is likely to prove a crucial turning point in the country’s political trajectory. Depending on the outcome of the election, Turkey may find itself on the path of democratic renewal or further consolidation or deepening of the existing competitive authoritarian regime. The paper presents a critical account of the last four years under the new presidential regime and tries to locate the Turkish experience in the broader debates on varieties of right-wing populism with references to Hungary, Brazil and India. A central hypothesis is that the on-going economic crisis has, to a certain extent, undermined the popularity of the AKP and the governing coalition. At the same time, we should not underestimate the resilience of the ruling coalition in the face of continued economic growth and the importance of additional dynamics such as the role of identity politics and domestic politics-foreign policy interactions.

There will be a reception following the lecture.

Please note that the event will also be live streamed. The zoom link:

BIO | Ziya Öniş is a Professor of International Political Economy at Koç University in Istanbul. He is the former Director of both the Center for Research on Globalization, Peace and Democratic Governance (GLODEM) (2010-2013) and the Graduate School of Social Sciences and Humanities (2006-2009) at Koç University. Prior to his appointment at Koç University, he was a faculty member in the Economics Department at Boğaziçi University. His recent research focuses on the crisis of liberal democracy, the global populist wave, authoritarian reversals and prospects for democratization in the emerging world, the broad contours and trajectories of the emerging post-liberal international order, the political economy of Turkey during the AKP era, new directions in Turkish foreign policy and domestic politics-foreign policy interactions.  His recent publications include (with M. Kutlay) “Turkish Foreign Policy in a Post-Western Order: Strategic Autonomy or a New Form of Dependence? International Affairs, Vol. 97, No. 4 (2021); (with M. Kutlay) “The Anatomy of Turkey’s New “Heterodox” Crisis: The Interplay of Domestic Politics and Global Dynamics. Turkish Studies. Vol. 22, No.4 (2021); (with M. Kutlay) “The New Age of Hybridity and Clash of Norms: China, BRICS and Challenges of Global Governance in a Post-Liberal International Order”. Alternatives: Global, Local, Political, Vol. 45, No. 3 (2020). He was elected as a Fellow of the Turkish Academy of Sciences (TÜBA) and received the prestigious TÜBİTAK Science Award in Social Sciences in 2012. He also received the Outstanding Faculty Award of Koç University in 2012 and the College of Administrative Sciences and Economics the Outstanding Teaching Award for 2020-2021. He is the co-recipient of the Elizabeth Meehan Prize for the Best Article Published in Government and Opposition in 2019.