Populism, Anti-Populism, and the Moralization of Politics 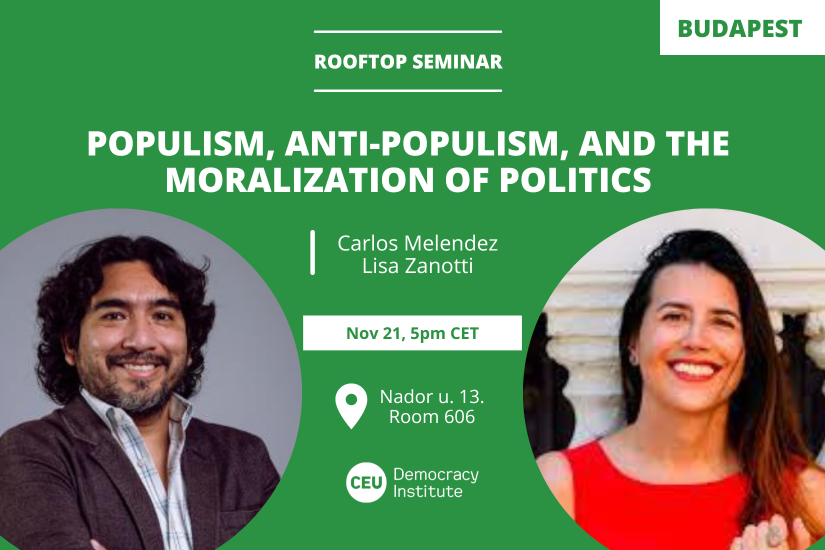 Recent developments in politics and society led to an increasing dichotomization of the public discourse, often in moral/affective terms. These developments make it relevant to focus not just on the absence of a certain political phenomenon but especially on the opposition to it. That is for instance that it is much more straightforward for people to define themselves as anti-fascist than no-fascist. This increasing dichotomization is linked to the emergence and success of anti-establishment and populist parties and the simultaneous (electoral) decline of mainstream ones. Populist actors, in fact, tend to conceive society (and politics) as divided into two homogeneous and opposing camps: the “pure people” vs. “the corrupt elite” (Mudde 2004).

The aim of the paper presented at the seminar is twofold. First, starting from an ideational approach to populism the authors define the relationship between populism, its “opposite” (elitism), and its “negative” (pluralism). In this respect, they contribute to the literature on anti-populism (Stavrakakis 2014; 2018; Moffitt 2018) disentangling its relationship with both elitism and pluralism. Secondly, they assess the relationship between populism and its contrary, anti-populism, on the democratic regime.

Carlos Melendez is OSUN Post-doctoral Fellow at the CEU Democracy Institute, and Professor at Universidad Diego Portales (Chile). He has a PhD in Political Science from the University of Notre Dame, United States, and was previously Visiting Professor at Facultad Latinoamericana de Ciencias Sociales – FLACSO-Ecuador, Pontificia Universidad Javeriana de Colombia, Universidad San Francisco de Quito (Ecuador), and Pontificia Universidad Católica del Perú, among others. His academic work has been published in various prestigious journals, and he has contributed to publications edited by Cambridge University Press and Oxford University Press. He is a regular columnist in La Tercera in Chile and a partner of 50+1 Political Analysis Group (Peru).

Lisa Zanotti holds a PhD in Political Science from Universidad Diego Portales (Santiago, Chile) and in Humanities from Leiden University (the Netherlands). Currently, she is Visiting Professor at the Faculty of Law at Universidad Autonoma de Madrid, leading researcher of the Post-doctoral project "Make it about representation: the missing link between populism and crisis," and an Adjunct Researcher at the Center for Social Conflict and Cohesion Studies (COES).

Robert Sata is Associate Research Fellow at the CEU Political Science Department. He joined the department in 2006 upon finishing his PhD. His research focuses on ethnic relations, minority rights and the politics of identity. He also works on issues of populism and political discourse as well as Europeanization, diversity and discrimination. He has taught courses at McDaniel College, Hungary and Babes-Bolyai University, Romania. At CEU, he teaches courses for the MA programs in Political Science and has supervised theses on ethnic relations, gender issues, intra-state conflict, migration, electoral campaigning, and the Roma in Europe.

Vera Messing is a Research Fellow at the CEU Democracy Institute as well as a senior research associate of Center for Social Sciences. She earned her PhD in Sociology at Budapest Corvinus University in 2000. Her work focuses on comparative understanding of different forms and intersections of social inequalities and ethnicity and their consequences. She has been involved in the coordination and research activities for several European comparative research projects and she is also the lead researcher of the Hungarian team of the European Social Survey, ERIC. She has widely published in academic journals and books.