The Ideological Profile of the Orban Regime 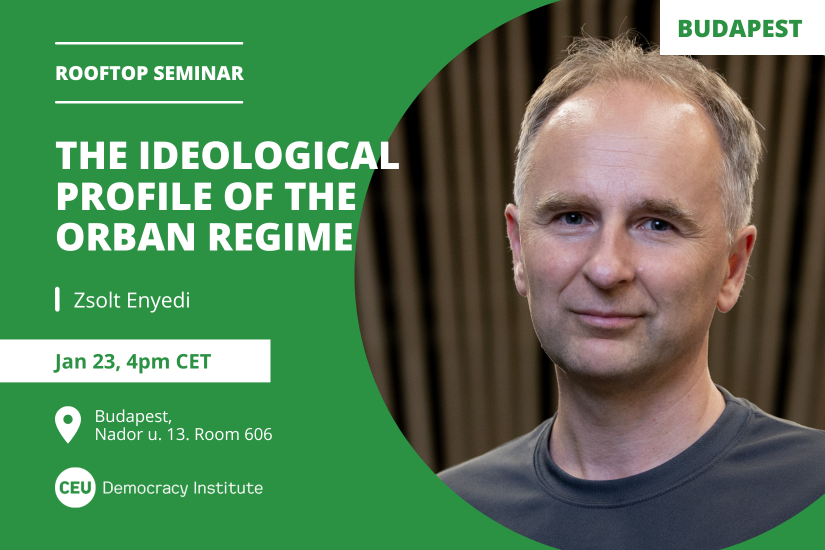 The paper argues for an ideology-centered interpretation of the Orban regime. The author proposes to consider those regimes ideological that promote a particular worldview through their signatory policies and discourse, advantage a well-defined set of values through the allocation of resources, and enact policies on key ideological objectives with long-lasting impact. Next to demonstrating that the post-2010 Hungarian political regime satisfies these criteria, he identifies three principal modules in the regime’s ideology: illiberal conservatism, civilizationist ethnocentrism and paternalist populism.

Zsolt Enyedi is a Senior Research Fellow at the CEU Democracy Institute, and Professor at the CEU Department of Political Science. He studied comparative social sciences, history, sociology and political science in Budapest and Amsterdam. The focus of his research interests is on party politics, comparative government, church and state relations, and political psychology (especially authoritarianism, prejudices and political tolerance). His articles appeared in journals such as Political Psychology, European Journal of Political Research, Political Studies, West European Politics, Party Politics, Political Studies, Europe-Asia Studies, Problems of Post-Communism, Journal of Ideologies or European Review. He was the 2003 recipient of the Rudolf Wildenmann Prize and the 2004 winner of the Bibo Award. His most recent book, Party System Closure, co-authored with Fernando Casal Bertoa, was published by Oxford University Press in 2021.

Andras Korosenyi is Research Professor at Centre for Social Sciences, Eötvös Loránd Research Network, Budapest, and Professor of Political Science at Faculty of Law, Eotvos University of Budapest. His research interest includes theories of democracy, political leadership and Hungarian politics. He is co-author of The Orban Regime: Plebiscitary Leader Democracy in the Making (Routledge, 2020), Toward Leader Democracy (Anthem Press, 2012) and co-editor of Political Leadership in Liberal and Democratic Theory (Imprint Academic, 2009).

Balint Magyar is a Senior Research Fellow at CEU Democracy Institute (since 2020), holding a University Doctoral degree in Political Economy (1980) from Eotvos Lorand University in Budapest. He has published and edited numerous books on post-communist mafia states since 2013. He was an Open Society Fellow for carrying out comparative studies in this field (2015-2016), Hans Speier Visiting Professor at New School (2017), Senior Fellow at CEU Institute for Advanced Study (2018-2019), and Research Fellow at Financial Research Institute (2010-2020). Formerly, he was an activist of the Hungarian anti-communist dissident movement, founder of the liberal party of Hungary (SZDSZ, 1988), Member of Hungarian Parliament (1990-2010), and Minister of Education (1996-1998, 2002-2006).

Balint Madlovics is a Junior Research Fellow at the CEU Democracy Institute. He holds an MA in political science (2018) from Central European University, a BA in economics (2016) from Corvinus University, and a BA in sociology (2021) from Eotvos Lorand University. As the research partner of Balint Magyar, he is the co-author of The Anatomy of Post-Communist Regimes (CEU Press, 2020) and A Concise Field Guide to Post-Communist Regimes (CEU Press, 2022). He has published articles in peer-reviewed journals like Public Choice since 2019, and contributed chapters to various reports and volumes of studies since 2015.

Andreas Schedler is a Senior Research Fellow at the CEU Democracy Institute. He is the Lead Researcher of the De- and Re-Democratization Workgroup and a Visiting Professor at CEU in Vienna. Before joining the CEU, he was a Professor of Political Science at the Center for Economic Teaching and Research (cide) in Mexico City. A leading comparative scholar of democracy, democratization, and authoritarianism, he has conducted research on democratic consolidation and transition, authoritarian elections, anti-political-establishment parties, political accountability, and organized violence.