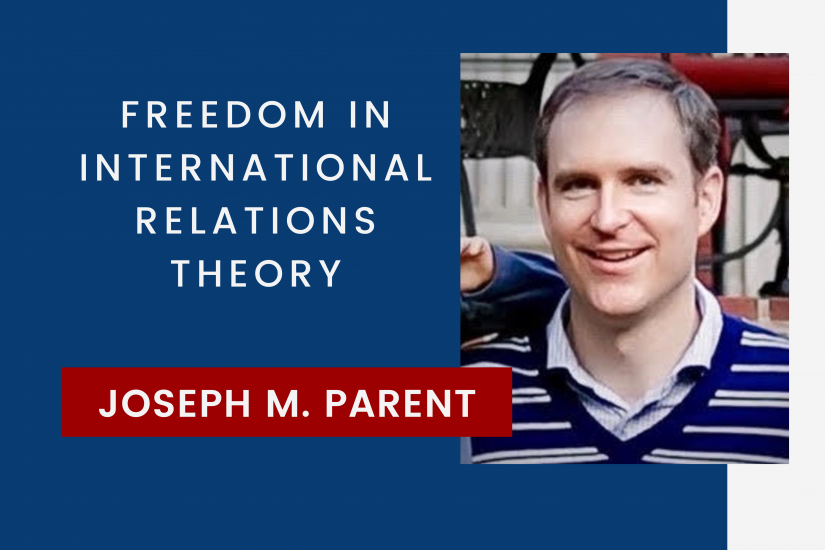 co-hosted by the Advanced Certificate in Political Thought

Much of what we know about freedom comes from, and is applied to, domestic settings. But what does freedom mean in international relations? We distinguish between two forms of freedom: structural freedom (freedom from domination or arbitrary power) and satisfaction freedom (freedom from interference or constraints on the pursuit of one’s desires). We then work through what each form of freedom means in anarchic settings, where third party-enforcement is rare. We examine these tradeoffs with respect to different actors in world politics, as well as potential approaches to increase freedom. Our central finding is that anarchy creates challenges for both conceptions of freedom, and that there are steep tradeoffs within and between each form of freedom across all potential approaches.

Joe Parent is a professor of political science at the University of Notre Dame. He received his BA from the University of Chicago and his PhD from Columbia University. His research examines how shifts in power affect cooperation. He is the author of Uniting States (Oxford, 2011), coauthor (with Joe Uscinski) of American Conspiracy Theories (Oxford, 2014), and coauthor (with Paul MacDonald) of Twilight of the Titans (Cornell 2018). He has published in the American Journal of Psychology, Foreign Affairs, International Security, Sociological Theory, History of Political Thought, and World Politics, assisted the National Intelligence Council on its Global Trends 2030 and Global Trends 2035 reports, and received a Fulbright fellowship in Rome and a Nobel Fellowship in Oslo. His research has been covered in The Atlantic, Cosmopolitan, FiveThirtyEight, Newsweek, the New Yorker, the New York Times, Scientific American, and Time, and on CBS “Sunday Morning”, Fox, MSNBC, NBC “Nightly News”, and NPR’s “This American Life”. He is an editor of the Columbia University Press Studies in International Order and Politics series, and co-director of the Hans J. Morgenthau Fellowship Program in Grand Strategy.