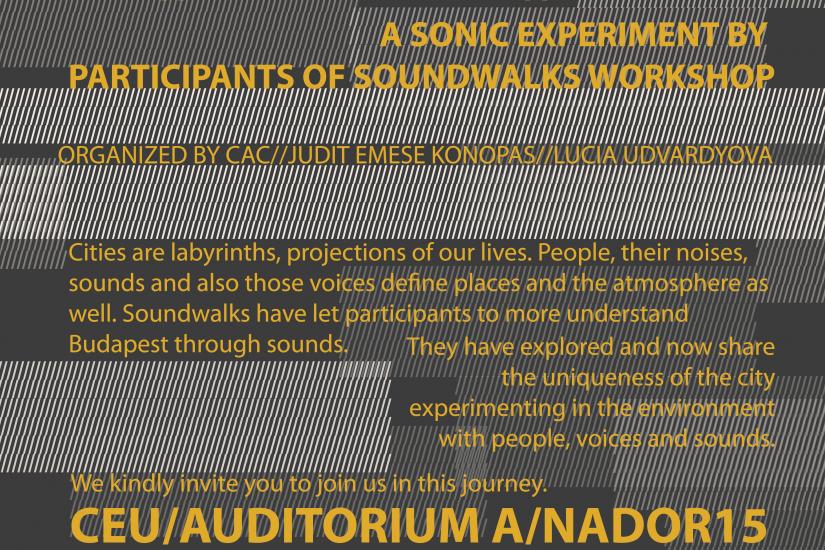 A Sonic Experiment by Participants of Soundwalks Workshop at CEU

Judit Emese Konopas got in touch with the meaning of space from an early age as she finished her degrees as an architect. She has gained her experience in various architect and interior design offices in London and in Budapest. She was awarded not only for her architectural, but for her photography works as well. Her works – which are primarily based on interaction, communication and juxtaposition, – were presented in several exhibitions throughout Europe. She published worldwide, including the field of interior design, architecture, photography and music.

From the beginning of her professional career, she focused on visualization and form of spaces. Her further interests widely spread into different genres such as architecture, art, music, photography and contemporary dance. After a phase of bouncing around them, she experiments on connecting the different fields and emerging them into her latest project, Earnest Endeavour with 4DSOUND.

Lucia Udvardyová is a music journalist and organiser. She holds a Masters degree in Electronic Culture and Semiotics from Charles University in Prague (MA Thesis: "Sampling: From Regression To Transgression Of Listening"). She has worked at the TV and Film School of the Academy of Performing Arts in Prague (FAMU) on an international project about audiovisual archives and their utilisation in the arts. In 2010, together with Peter Gonda, she co-founded Easterndaze, a project that aims to document and interconnect the emerging underground scenes in Central and Eastern Europe. Together Udvardyová and Gonda run a music label called Baba Vanga. She has collaborated with Czech Radio, Resonance FM, The Quietus, Electronic Beats, Ad Hoc, New York Press, Flash Art, and Digicult, among others. Between April and June 2015, she curated an exhibition series of events introducing several labels and collectives from Central and Eastern Europe at the OFF Biennále in Budapest. She also works for SHAPE (Sound, Heterogeneous Art and Performance in Europe), a new pan-European festival initiative that promotes innovative music and audiovisual art. She is a musician and a DJ.


Admission is free! You are welcome!