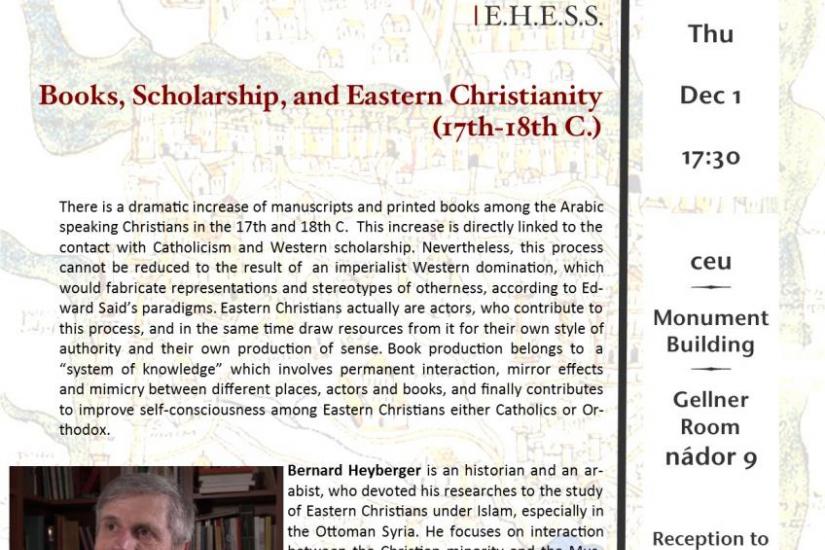 There is a dramatic increase of manuscripts and printed books among the Arabic speaking Christians in the 17th and 18th C. This increase is directly linked to the contact with Catholicism and Western scholarship. Nevertheless, this process cannot be reduced to the result of an imperialist Western domination, which would fabricate representations and stereotypes of otherness, according to Edward Said’s paradigms. Eastern Christians actually are actors, who contribute to this process, and in the same time draw resources from it for their own style of authority and their own production of sense. Book production belongs to a “system of knowledge” which involves permanent interaction, mirror effects and mimicry between different places, actors and books, and finally contributes to improve self-consciousness among Eastern Christians either Catholics or Orthodox.

Bernard Heyberger is an historian and an arabist, who devoted his researches to the study of Eastern Christians under Islam, especially in the Ottoman Syria. He focuses on interaction between the Christian minority and the Muslim society, as well as on the dynamics of contact, opposition and mimicry between Eastern Christians and the West. He gives a special attention to the role of Western scholarship in the building up of sectarian, ethnic and national identities since the 17th C. He is currently a Professor at the Ecole des Hautes Etudes en Sciences Sociales and at the Ecole Pratique des Hautes Etudes. Main publications :