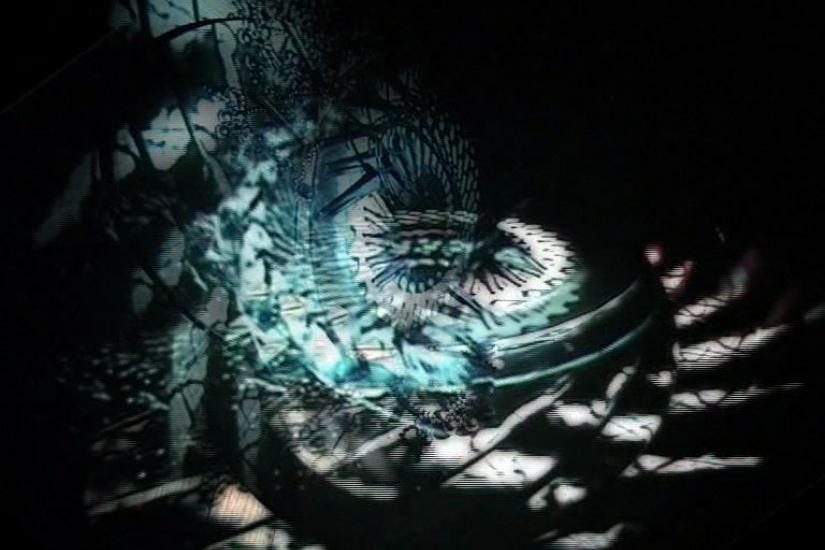 This evening two audiovisual improvisations frame some contemporary music for flute. Gergely Ittzés flutist and Jenő Lévay visual artist have been cooperating for two decades. They have created inspiring situations which give fruitful framework for their improvisation based on the interaction of images and sounds. In the case of Breathing Light, the lamp in the mouth of the flutist and its continuously changing light lead the pictorial interferences of the video-installation built on several cameras and projectors. During the performance the visual artist is also active…

Drumming Pencils is built on the special drawing technique of Lévay. Amplified sounds of the multi-pencil-action provide a percussion part which the flutist improvises on, while his performance induces visual effects: in this case public can look into the tube of his flute. Sounds are modified by electronics. Visual artworks created in similar situations will be exhibited in the new exhibition hall next to the Auditorium.

Between the two experimental audio-visual performances you can listen to contemporary flute pieces utilizing the new playing techniques of the flute including. Pieces will be heard by Stockhausen who died 10 years ago, István Matuz now celebrating his 70th birthday, CEU artist-in-residence Péter Tornyai Péter, and the performer himself.

Drumming Pencils – exhibition of the graphics made by Jenő Lévay is attached to the audio-visual performance. The exhibition is opened by György Gábor philosopher in the break of the concert. The exhibition can be visited until February 2, 2017 in the new exhibition hall of CEU (Bp., Nádor u. 15.)