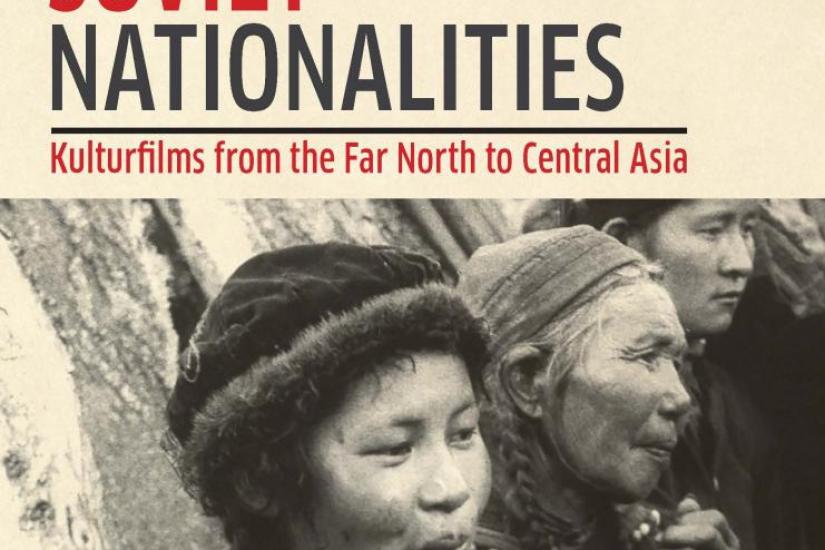 he Blinken Open Society Archives and the Visual Studies Platform at CEU cordially invite you to the book launch and discussion of:

In the early decades of the Soviet Union filmmakers sought to create a cinematic map of the new state by portraying its land and peoples on screen. These films – at the time referred to as kulturfilms – served as experimental grounds for developing the cinematic formulae of a multiethnic Soviet identity and developed multiple scenic, cultural and ethnographic modalities for showing the Soviet periphery. Screening Soviet Nationalities examines the non-fictional representations of Soviet borderlands from the Far North to the Northern Caucasus and Central Asia between 1925-1940. Beginning with Dziga Vertov and his vision of the Soviet space as a unified, multinational mosaic, Oksana Sarkisova rediscovers films by Vladimir Erofeev, Alexander Litvinov, Vladimir Shneiderov, Mikhail Slutskii, Amo Bek-Nazarov, Mikhail Kalatozov, Roman Karmen and other filmmakers who helped construct an image of Soviet ethnic diversity and left behind a lasting visual legacy. The book contributes to our understanding of changing ethnographic conventions of representation, looks at representations of diversity despite the homogenizing ambitions of Soviet-driven modernity, and reexamines methods of blending reality and fiction as part of both ideological and educational agendas. Using a wealth of unexplored archival evidence, Sarkisova analyses constructions of exoticism, backwardness and a multinational Soviet space through these remarkable and underexplored historical travelogues.

"Sarkisova wrote an altogether original book. Her expertize in Soviet documentary films and nationality policies is unparalleled. What makes this book particularly valuable is that the author succeeded in placing her topic in a wide international and theoretical context"
Peter Kenez, Professor Emeritus at University of California Santa Cruz

“Screening Soviet Ethnicities is a superb book that makes a compelling case for the importance of early documentary films in the Soviet cultural project.  Through her thorough research, engaging writing, rich details, and insightful analyses of myriad films, Sarkisova convincingly demonstrates how Soviet ethnographic filmmakers struggled to navigate the unstable political landscape to produce films that captured the vanishing traditions of peoples in remote regions the USSR as well the state’s efforts to sovietize them. A “must read” for anyone interested in Soviet cinema, Soviet cultural politics, and Soviet nationalities policy.”
Denise Youngblood, Professor of Russian History at the University of Vermont

Oksana Sarkisova, PhD, is Research Fellow at Blinken OSA Archive at Central European University and Director of Verzio International Human Rights Documentary Film Festival, Budapest (www.verzio.org). Her fields of research are cultural history, memory and representation, film history, amateur photography, and visual studies. She authored Screening Soviet Nationalities: Kulturfilms from the Far North to Central Asia (2017), co-edited Past for the Eyes: East European Representations of Communism in Cinema and Museums after 1989 (2008), and has published in peer-reviewed journals and collective volumes on film history, nationality politics, contemporary Russian and Eastern European cinema, and amateur photography. She teaches courses on visual theory, memory politics and Eastern European cinema, documentary cinema and human rights, and documentary filmmaking for historians. She has been visiting professor at Eötvös Loránd University (Budapest) and Williams College (USA), and organized Verzio Visual Lab workshops since 2010. She directed CEU Summer Schools Documentary Cinema in the Digital Century (2013) and Screened Memories: Historical Narratives and Contemporary Visual Culture (2016) and was invited as tutor to hold workshops at Cinema Without Borders (organized by Movies that Matter and Karama HRFF), Caucadoc, and Summer School on Cinema and Human Rights (Galway); she also served as Jury member at International Film Festivals in Nuremberg, Kiev, Zagreb, Warsaw, and Venice.

The book is available in the CEU Library and can be purchased with a discount at the book launch.