University Histories and the Place of the University Today 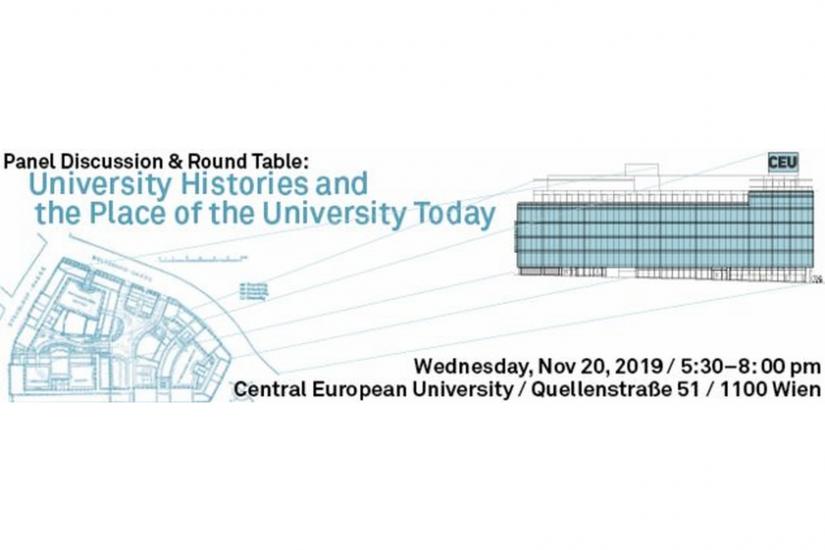 Panel discussion and roundtable
The event will be live streamed at Nádor u. 15, Quantum Room (101), Budapest Campus

What is the place of the university in contemporary society?
What should be the physical characteristics of the university as a space in the public sphere?
This event will reflect on these and related questions and bring the example of CEU to bear on the history of universities – and the other way around.

We will be addressing the “place” of the university in a double sense: in terms of the complex relations between the university and society, and in terms of the physical space created by the university’s architecture. Depending on the university model, the social and political place of the university can vary dramatically: a research university arguably has a different role to play than a liberal arts college. Likewise, a university’s place on the urban map and its spatial organization can reveal much about how concepts of teaching and research have changed over time, about distinctions between academic and other forms of knowledge, about division and convergence between different disciplines, about the ways in which universities generate and transmit knowledge, and about the role they have played (or were meant to play) in public life.

Denise Phillips: The University in Public Life: Some Vignettes from Germany and the United States (Abstract)

II. Round Table: The Place of the University Today
Chair: Jan Hennings

Mitchell Ash is a professor emeritus of modern history with emphasis in the History of Science and Speaker of the multi-disciplinary Ph.D. program, “The Sciences in Historical, Philosophical and Cultural Contexts“ at the University of Vienna.

Aziz Al-Azmeh is a historian of the Arab World and a University Professor Emeritus at the History Department at CEU. His publications include, amongst others, Islam and Modernities, 3. edn. (London, 2008) und The Emergence of Islam in Late Antiquity, 2. edn. (Cambridge, 2017).

Jean-Louis Fabiani is Professor of Sociology and Social Anthropology at CEU. His research focusses among others on cultural policy and the sociology of culture.

Dorit Geva is Associate Professor at CEU’s Department of Sociology and Social Anthropology and the founding Dean of Undergraduate Studies at Central European University, overseeing launching of new BA’s at CEU Vienna.

Karl Hall is Associate Professor at the Department of History at CEU where he teaches courses on Central and East European history of science and intellectual history.

Jan Hennings is Associate Professor at the Department of History at CEU and a member of Die Junge Akademie in Germany. His work has focused on Russian-European diplomatic encounters in the early modern period.

Michael Ignatieff is a writer and former politician, Professor at the History Department and President and Rector of CEU.

Fabian Krämer is Assistant Professor for the history of science at LMU Munich and a member of Die Junge Akademie in Germany. Among others, his research focusses on the pre-history of the “two cultures” of the sciences and the humanities/literature.

Maria Kronfeldner is Professor at the Department of Philosophy and at the Social Mind Center at CEU. Among others, her areas of competence are the history of the life sciences, general philosophy of science and the philosophy of mind.

Denise Phillips teaches German history and the history of science as Associate Professor of history at the University of Tennessee.  Her research focusses on intersections between science and civil society, as well as on interconnections between expert and lay knowledge.

Ulrike Plettenbacher, Director of CEU Vienna Campus, joined CEU in the beginning of 2019. She began her career at CEU as Head of Operations (VPO), supporting and conducting CEU's move from Budapest to Vienna.