Russia vs. the West and the New Politics of Hybrid War 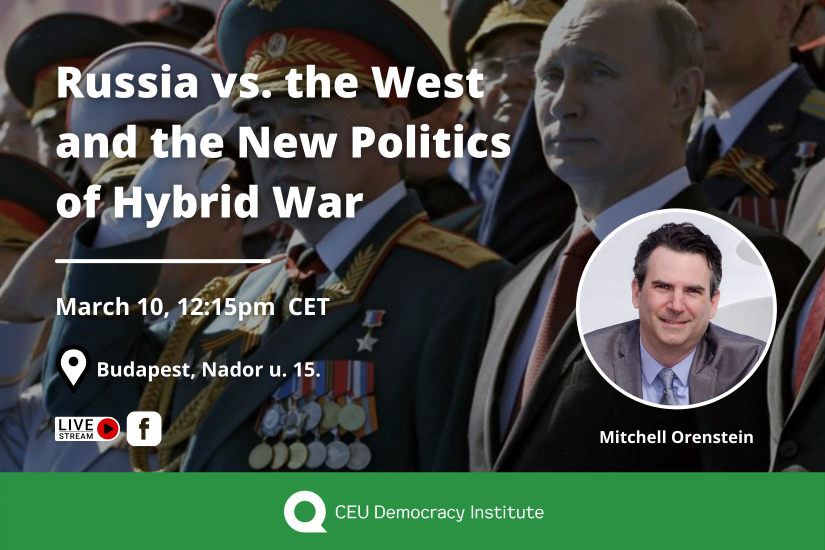 With Europe abuzz with talk of war in Ukraine, Prof. Mitchell A. Orenstein explores geopolitical conflict between Russia and the West over The Lands in Between, the title of his 2019 book with Oxford University Press. Since at least 2007, Russia and the West have engaged in a tug of war over countries perched in between, a conflict fought sometimes with military force, but more often by covert means, hacking, disinformation, and other tools of hybrid war. Though this conflict has been going on for more than a decade, many do not see or want to believe it is happening. Now that people perceive open conflict, this talk will explain the rules of this new hybrid war and how it affects countries like Ukraine and those within the European Union.

Please note that this is a hybrid event: you may join in-person (Budapest campus, Nador u. 15., room 103), or follow it online, on the CEU Democracy Institute’s Facebook-page.

If you would like attend the lecture in-person, then please register here.

Please note that proof of vaccination is required to enter CEU premises, and wearing a mask is obligatory in all common areas. Read more about CEU’s Covid-protocol here.

Mitchell A. Orenstein is Professor and Chair of Russian and East European Studies at University of Pennsylvania and Senior Fellow at the Foreign Policy Research Institute. His published work has explored the political economy of transition in Central and Eastern Europe and the foreign policies of Russia and Eastern Europe. Most recently, he is the author of The Lands in Between: Russia vs. the West and the New Politics of Hybrid War and co-author of From Triumph to Crisis: Neoliberal Economic Reform in Postcommunist Countries. He is also previously the author of two prize-winning books, Out of the Red: Building Capitalism and Democracy in Postcommunist Europe and Privatizing Pensions: The Transnational Campaign for Social Security Reform and also produced two books on European social policy with the World Bank, Roma in an Expanding Europe: Breaking the Poverty Cycle and Pension Reform in Europe: Process and Progress. His research work lies at the intersection of comparative politics, international political economy, and international relations, employing a problem-driven research approach based on asking policy-relevant questions and answering them through in-depth field research.