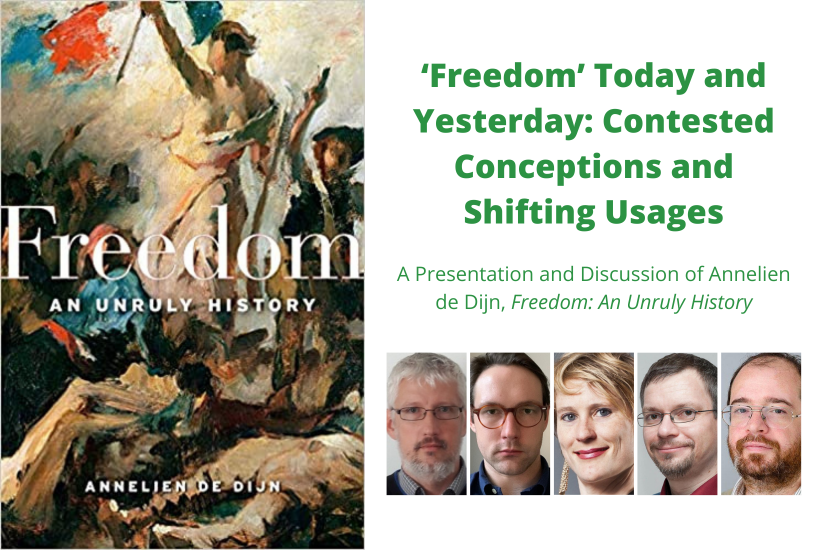 Annelien de Dijn’s recent monograph, Freedom: An Unruly History (Harvard University Press, 2020), prompts us to critically rethink our received notion of what it means to be free.

Contemporary mainstream liberal and conservative political thinking in Europe and North America is often structured around a relatively shared conception of freedom: “being left alone by the state.” The implication is that democracy, expressed through the state, and freedom, expressed through civil society, act as opposing political forces. Our received, current understanding of freedom appears to be held in common across the political spectrum, and its denotations and connotations appear almost natural, as something passed down to us directly from our intellectual forebearers.

As de Dijn argues, however, this view requires nuance. To historicize our contemporary view means to recognize that a particular conceptual rupture began in the eighteenth century which generated our contemporary view. de Dijn points out that from antiquity until the height of the Enlightenment, a different notion of freedom was held in common in the Western tradition. Antique conceptions of freedom focused on self-government, and freedom acted rather as the antipode to legal categories of “enslavement” or “subjugation”. In that sense, an earlier Western conception of political freedom was to “exercise control over the way one [was] governed,” a notion which could be reconceived in today’s terminology as “a democratic conception of freedom.”

The book presentation and subsequent discussion will reflect further on de Dijn’s critical historicization of the concept of ‘freedom’ within the Western canon of political thought. On the one hand, the discussion aims to link de Dijn’s discussion to contemporary political developments ‘on the ground’ in Europe and North America as well as to recent historiographic developments in the history of political thought. As such, the aim of this discussion is to reflect critically on contested concepts in contemporary political language, point out to their ambiguities of meaning through time, and the consequences for today’s conceptions of politics.

Please note that this is an online event co-organized by the CEU Democracy Institute and the Institute of Political History. You will be able to join here.

Annelien de Dijn is Professor of History at Utrecht University, where she teaches political and intellectual history. Her research focuses on the history of political thought in Europe and in the United States from 1700 to the present. She has a particular interest in the histories of key political concepts such as freedom, democracy and liberalism, as well as in Enlightenment political thought.

Gábor Egry (moderator) is a historian of nationalism, everyday ethnicity, and post-imperial transition in modern East Central Europe. He is the director-general of the Institute of Political History in Budapest and currently the Principal Investigator of the European Research Council Consolidator Grant “Negotiating post-imperial transitions: from remobilization to nation-state consolidation: a comparative study of local and regional transitions in post-Habsburg East Central Europe” (2018–2022).

Cody James Inglis is a Doctoral Candidate in Comparative History at the Department of History, Central European University. He is Junior Researcher on the ERC Consolidator Grant “Negotiating post-imperial transitions” (2018–2022) and co-convener of the research network “Intellectual History in East Central Europe”. His dissertation focuses on the history of republican political thought in interwar East Central Europe and more broadly works on the social and political histories of post-imperial transition in post-Habsburg space.

Zoltán Gábor Szűcs is Research Fellow at the Center for Social Sciences in the Institute for Political Science at Eötvös Loránd Research Network, where he is the head of The Paradox of Realism Research Group. His research interest lies in political theory (especially political realism).

Balázs Trencsényi is a historian of East Central European political and cultural thought, and Lead Researcher of the Democracy in History Working Group at the CEU Democracy Institute, and Professor at the Department of History. He also serves as Director of the History in the Public Sphere Erasmus Mundus+ Program, and as Co-Director of Pasts Inc., Center for Historical Studies.